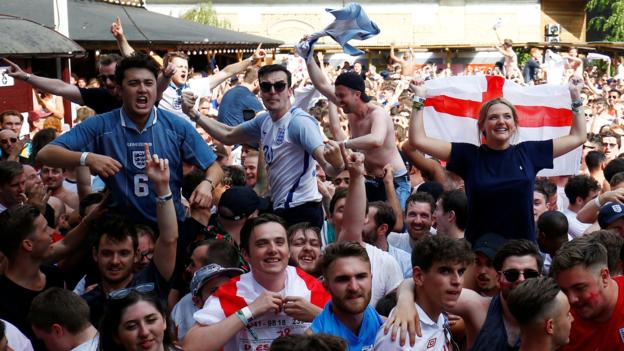 Football is experienced as doubt. Football is watched feeling sick. It is wishing matches finished, wanting to walk out of a stadium even as you’ve been desperate to be there, being convinced that the most heartbreaking possible scenario is the most likely thing to pass.

And usually it does. Football is about losing. Only one team can win a league. Thirty-two teams went to the World Cup; 31 will go home wondering what if.

The idea England might be the exception both to that rule and to a torturous history of defeat, pain and regrets still feels extraordinary. It also feels dangerous, because while football is also about being powerless to prevent something awful happening to something that matters to you so much, it is equally about being convinced that even a thought or stray sentence could instantly summon disaster.

Any neutral watching England 2-0 up against Sweden could tell they were not going to lose. Many England fans were convinced that remarking “we’re the better team here” to the person next to them would be to guarantee an immediate Swedish goal.

It is why being 1-0 down can often be more relaxing than being 1-0 up. What’s the worst that can happen now the worst thing is already happening?

And so you lie to yourself. We’re just going to enjoy the occasion. It’s only sport. I didn’t expect us to win anyway.

You tuck yourself behind established beliefs. England are an embarrassment at big tournaments. England don’t win penalty shootouts. English footballers are spoiled, selfish and out of touch with those who help fund their crazy wages.

Hope is a delusion. Dreaming is for night-time. Football is disappointment.

You know all this is true. You also know what football can do for you. It makes you leap around and grab your friends around the neck and roar at each other’s faces from inches away. It makes you jump on the back of strangers. It makes you feel the same way at exactly the same time as millions of people you will never meet.

You stay with football because of the possibility of all this. You keep daydreaming because of the little part of you that doesn’t consider this a dream at all. You tell other people not to look beyond the next game and then do exactly that.

Because football can change. You miss a penalty and then the other team miss two. You go further into a tournament than you have in more than a quarter of a century and look up to see the big boys all gone. You listen to the players and read their social media and you find yourself seeing shared characteristics and people you like.

And when football changes, we change with it. From shouting at defenders to get rid of it, to lump it long when the press comes on, to contentedly watching them keep hold and play it out. From worrying which unheralded opposition player will be the bogeyman this time to relishing the world waking up to Kieran Trippier and Harry Maguire. From avoiding deathless England friendlies and their endless substitutions and meaningless results to wishing the next game was here now and being able to name Gareth Southgate’s first-choice team in a single breath.

One of the few lasting bequests of London 2012, a sporting carnival where too many big races now have asterisks next to them, was that sense – for a nation that spends so much time reflexively looking backwards – of a vision of modern Britain that felt simultaneously new and familiar to every one of us.

It was there in the stories of the three stars of Super Saturday: Jessica Ennis-Hill, a mixed-race girl from Sheffield; Greg Rutherford, a lad whose great-grandfather played football for England over a century ago; Mo Farah, a boy who arrived in west London aged eight from east Africa to make the capital his home.

This is an England team that represents the England of 2018. The pale kid from Sunderland in goal, a midfielder from Milton Keynes with a Nigerian dad and English mum. Three big lads from south Yorkshire in defence, a striker born in Jamaica and raised in the scruffy part of west London. Another midfielder schooled in Lisbon, a superstar captain who learned on loan at Orient and Millwall.

There is an unreality to it all. A frozen, sodden winter when the rain never stopped, a summer that started early and lit up everything for weeks. Sunlit mornings, evenings watching football with the windows and doors open and daylight in the sky until all the celebrating is done. A team beaten by a nation of 330,000 at their last big tournament, gone after the group stages at the previous World Cup, careering into the semi-finals and enjoying every moment of it.

There are limitless reasons to fall out of love with football. The idiots you know even in the home end at your own club, the jingoism that snarls in the slipstream of national success. The price of shirts, the price of tickets, the booking fee for something bought in a microsecond from an automated page. The multiple satellite packages, the kick-offs before lunch and after Sunday tea-time, the money going to middlemen in a deal that didn’t need them.

Then you think of the adrenalised peaks and emotional releases of the past three weeks, the scenes in front of big screens around the country, the pleasure of seeing your happiness reflected in the faces and moods of people you have almost nothing else in common with.

Only football can do this. England winning the rugby union World Cup brought enormous pleasure to vast numbers, the home Ashes triumph of 2005 giddy disbelief to those who had long grown used to Australian domination.

Yet neither touched as many distant corners as this World Cup. The peak television audience for the deeds of Michael Vaughan’s team was 8.4 million; 15 million saw Jonny Wilkinson drop his goal. Andy Murray’s first Wimbledon victory brought in 17.3m, and that was a win for Great Britain.

England’s last-16 win over Colombia peaked at 23.6 million. Wednesday night’s semi-final is likely to draw in yet more.

And you don’t want any of it to end. Football is going to revert to type for two of the teams still left in this World Cup. It will go back to being about regret and dejection and what might have been.

For one team it will be something else. Colour, sunshine, joy.

Maybe it will all end here. Maybe, this once, it will not.