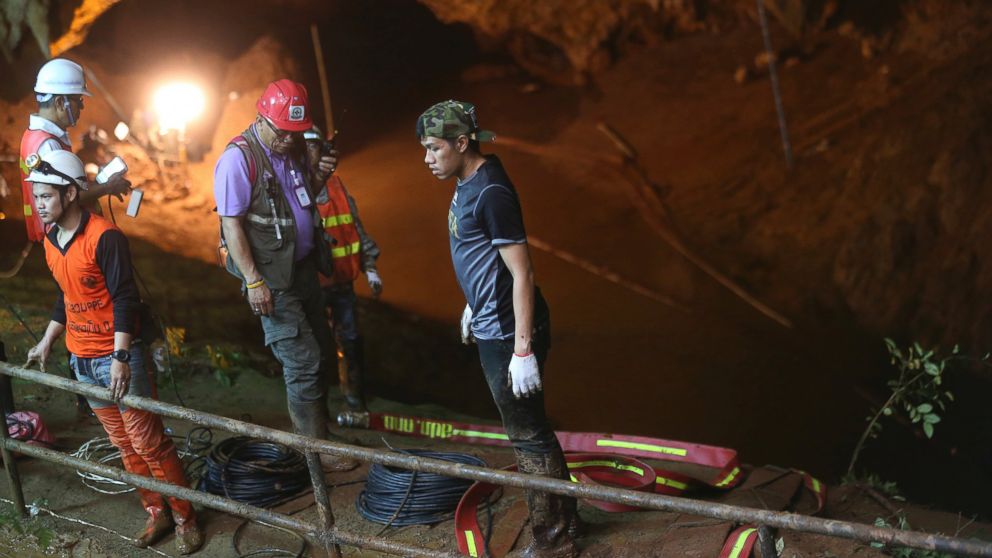 A nation continued to hold its breath Friday and hope for the safe return of 12 young soccer players and their coach who remain trapped in a flooded cave in northern Thailand after disappearing nearly a week ago.

“My son! Come on out! I’m waiting for you here!” one mother could be heard calling into the cave recently as she stood next to her child’s bicycle.

Tham Luang, Thailand’s longest cave and a popular tourist site, is said to be a labyrinth, miles of passageways and tunnels running underground that can flood up to 20 feet during heavy downpours.

It’s believed that the coach often brought his team to the cave for fun excursions. The boys, who are between 11 and 16 years old, went missing with their coach after he took them to the cave complex after soccer practice June 24.

It’s believed the group crawled through a narrow channel that may now be flooded after days of heavy rainfall.

More than 1,000 rescuers have been involved in the search, including a U.S. military search and rescue team. Rescuers have had to twist and slide their way through the wet rock.

There are professional cave divers from the U.K. and also Thai Navy Seals involved. Specialists have been drafted in, including engineers, to try and create new access points with rescuers drilling through the rock. Also, care packages containing food, torches and maps of the cave have been dropped down through smaller gaps in case a member of the soccer group comes across them.

The massive, frenzied rescue effort has been hampered by bad weather, however, as Thailand enters its rainy season. Trucks arrived recently with concrete to pave the area and make it less muddy as the rain stopped and started.

Earlier in the day at the entrance, there was a constant stream of people going in and out as the rescue operations occurred and water was pumped nonstop as well.

Tents have been set up everywhere: one, with doctors and nurses handing out medicine for those who need it; another, with families anxiously waiting for any word on the team. Several tents also were set up to cook the food for all the people on location.

“There has to be faith. Faith makes everything a success,” Chan-o-cha said Friday, according to The Associated Press.

Rescuers have been looking farther afield for other possible entrances, trudging through the rain-soaked jungle to find hidden shafts in the mountain that might lead them to the team. Rescuers are hoping that the players and coach found a spot inside the cave with air and clean water.

And, relatives, friends and monks have continued to keep vigil near the bags and bicycles that the youth left behind that day.

There’s also a social media hashtag that translates as “the strangers we want to meet the most” trending in Thailand and people are sharing cartoons and images as well as prayers on Twitter and elsewhere.