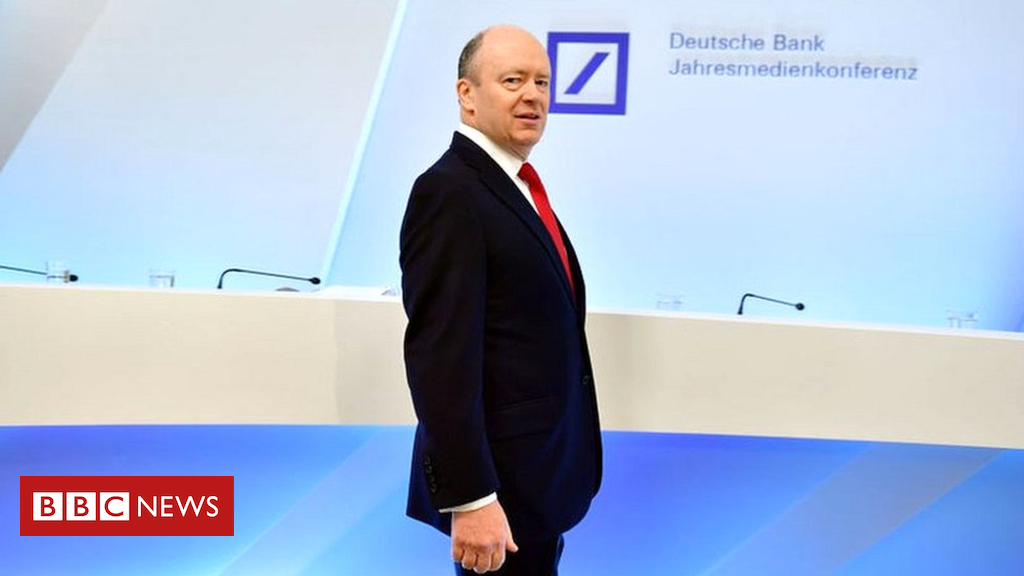 The boss of Deutsche Bank, John Cryan, is to step down amid continued losses at Germany’s biggest lender.

He will be replaced by co-deputy chief executive Christian Sewing.

Mr Cryan has held the job since 2015, during which time Deutsche Bank has reported three years of losses.

Chairman Paul Achleitner thanked Mr Cryan but said: “Following a comprehensive analysis we came to the conclusion that we need a new execution dynamic in the leadership of our bank.”

The lender has faced a sales slowdown and its share price has fallen 30% this year.

Mr Cryan will leave Deutsche Bank at the end of the month.

Mr Achleitner said: “Despite his relatively short tenure as chief executive, John Cryan has played a critical role in the almost 150 year history of Deutsche Bank – and laid the groundwork for a successful future of the bank. The supervisory board in general and I personally are grateful for this.”

Mr Sewing, who has been with Deutsche Bank for more than 25 years, has been appointed as chief executive with “immediate effect”.

Deutsche Bank announced the decision after an emergency board meeting, called by Mr Achleitner, to discuss succession on Sunday.

According to Reuters, he began a search to replace Mr Cryan after the bank reported an annual loss of €500m (£436m) at the end of February.

Mr Cryan was appointed as co-chief executive in July 2015 to overhaul the bank following a number of regulatory problems stretching back to before the financial crisis.

He was also tasked with controlling the bank’s spiralling costs and quickly cut thousands of jobs.

However, after becoming sole chief executive in 2016, the lender continued to struggle, in large part because of a slump in its investment banking division which accounts for more than half of sales.

In resolving its legal difficulties, it also incurred a series of heavy penalties, including a $ 7.2bn (£5.9bn) payment to US authorities in 2016 over an investigation into mortgage-backed securities.

At that time, it was considered top be the most dangerous bank in the world after the International Monetary Fund (IMF) found that a potential collapse of Deutsche posed the biggest risk to the stability of the global financial system.

Deutsche Bank and Banco Santander’s US unit were the only two of 33 banks to fail the test to see how they would perform in a financial crisis.

Markus Riesselmann, an analyst at Independent Research, told the AFP news agency: “[Mr Cryan] had to battle serious problems that his predecessors swept under the rug for years.

“He’s largely cleared those up and now it looks like Deutsche can’t turn things around regarding margins. But I doubt a new chief executive could successfully make that transition.

“It seems rather to be a fundamental ‘Deutsche Bank problem’.”

Commenting on the new chief executive, Mr Achleitner said: “In his more than 25 years at Deutsche Bank, Christian Sewing has proven himself a strong and disciplined leader.

“The supervisory board is convinced that he and his team will be able to successfully lead Deutsche Bank into a new era. We trust in the great ability of this bank and its many talents.”

According to observers, his appointment points to a strategic shift at the lender towards retail banking in its home market Germany.

Mr Sewing was most recently responsible for Deutsche Bank’s private and commercial bank.

Deutsche Bank also announced that the co-head of its corporate and investment banking, Marcus Schenck, is leaving.