Investor concerns over Deutsche Bank were put to one side on Monday as the embattled German lender performed better-than-expected in the European Central Bank‘s (ECB) latest stress tests.

Deutsche shares climbed a modest 0.2 percent in early deals after it registered a core tier 1 capital ratio of 8.14 percent at Friday evening’s test. This figure is essentially the cash buffer it has in the event of a financial crisis

The assessment looked at the bank’s 2017 balance sheet and tested how it would stand up to the strain of what the ECB described as “adverse market developments.”

In 2016, Deutsche Bank saw its ratio drop to 7.8 percent, ranking it as one of the lowest in the health check. However, the 2018 results still placed the German lender at 40th place out of the 48 lenders tested and analysts have warned that the progress shown may not be enough. 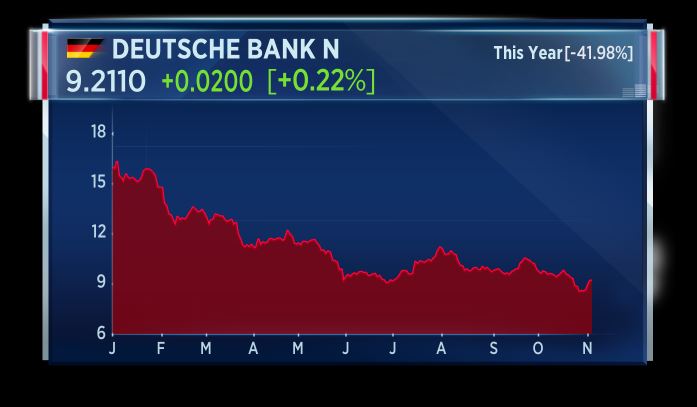 “The problem in the euro zone is a dearth of bank lending,” consultancy High Frequency Economics said in its weekly research note Monday.

“(The) stress tests, published on Friday, show some progress toward bank recapitalization, although not enough to prevent some of the strongest banks in Europe from flirting with mandatory recap (recapitalization) levels in the adverse scenario,” the firm said.

On Friday, James von Moltke, the chief financial officer of Deutsche Bank, said his company had shown a “greater resilience across market, credit and operational risk” despite tougher tests than what was seen two years ago. “We have the liquidity and capital resources to support profitable growth,” he added in an official statement.

The bank’s shares are down more than 42 percent since the start of the year with the bank seeing a slide in profits, slow client activity and pressure to consolidate. In the third quarter of this year, the bank reported a net income of 229 million euros ($ 262.71 million). This was above the 149 million euros expected in a Reuters poll of analysts, but 65 percent below what the bank reported a year ago.

However, not everyone has seen the bank in such an unfavorable light. Douglas Braunstein, the founder and managing partner of Hudson Executive Capital and J.P. Morgan’s former finance chief, bought a 3.1 percent stake in the beleaguered German lender after studying the bank for a year before jumping in.

But the bank’s woes go far back to the start of the financial crisis. The German lender has faced billion-dollar fines, fierce competition, decreased market share in both commercial and investment banking, as well as several management reshuffles.

Sewing, who was appointed as CEO in April in an abrupt management move, acknowledged the Fed’s concerns, saying “more needs to be done.” But added that “we are confident to get over this over the next 12 months.”

The cost of insuring exposure to Deutsche Bank’s debt has risen sharply, signaling that it’s an increasingly riskier asset and inviting further comparisons with Lehman Brothers. Five-year credit default swaps (CDS) — financial products used to hedge this exposure — are around 141 basis points currently, and much higher than the 74 basis points they were trading at in January, according to data from Reuters.

There’s been speculation of a merger between Deutsche Bank and domestic rival Commerzbank for years, but the Financial Times reported in August that many external observers based in Frankfurt now believe a proposed deal simply comes down to a question of when — and not if. With almost 2 trillion euros ($ 2.2 trillion) in total assets, a Deutsche Bank-Commerzbank alliance would create Europe’s third-largest bank after HSBC and BNP Paribas.

However, the firm has never confirmed this speculation. At a banking conference in Frankfurt earlier this year, Sewing said that consolidation in the sector was likely to increase considerably.

“Europe does not need as many banks as possible, Europe first and foremost needs strong banks,” Sewing said.

Ingo Speich, a fund manager Union Investment which is one of Deutsche Bank’s larger shareholders, told CNBC’s Annette Weisbach in August this year that an imminent merger between Deutsche Bank and Commerzbank did not seem very likely.

That’s because the immediate priority for both lenders will be to deliver on their respective targets, Speich added, before saying that an extensive amount of “homework” needed to be done before such a deal could become reality.

Critics of Deutsche Bank have also pointed to the management reshuffle, constant restructuring and movement of personnel as one of the reasons for the bank’s poor performance. The year 2016 saw a change in Deutsche Bank’s senior management team after co-chairmen Anshu Jain and Jurgen Fitschen stepped down, giving way to John Cryan, the former UBS boss, as the new CEO.

However, Cryan was ousted earlier this year after investors lost faith that he could return the bank to profitability after three consecutive years of losses. In April this year, 47-year old Sewing, a German national, was promoted to CEO.

Sewing and his new team have promised to deliver further cost-cutting to revamp the balance sheet. In the third quarter of 2018, the bank said its adjusted costs were down 1 percent year-on-year and it aims to bring them further down to 23 billion euros and 22 billion euros in 2019.