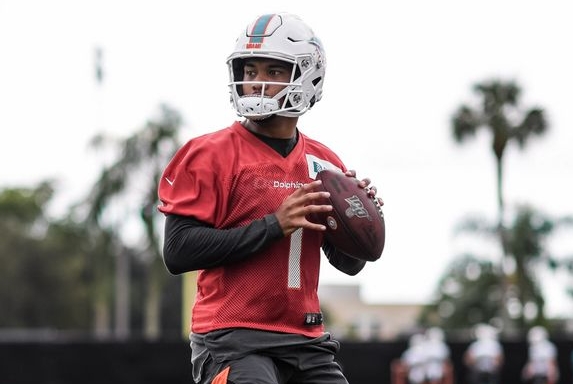 MIAMI GARDENS, Fla., Oct. 28 (UPI) — Tua Tagovailoa will debut as a starting quarterback on Sunday for the Miami Dolphins, and he has a tough matchup in the Los Angeles Rams.

The Alabama product will stare at All-Pro defenders Aaron Donald, Jalen Ramsey and a stellar secondary when he takes his first snap Sunday at Hard Rock Stadium in Miami Gardens, Fla.

The Dolphins’ game against the NFL’s fifth-ranked pass defense and best defense in the NFC, in terms of points allowed, ranks as the toughest in at least a decade for a quarterback selected in the Top-5 of an NFL Draft.

“I don’t like to put expectations on anyone,” Dolphins coach Brian Flores said Monday on a video call with reporters. “I think we just need to have good meetings, have a good walkthrough, have a good practice, put together a good week and just try to play a good football game come Sunday afternoon against a good opponent.

Tagovailoa — the No. 5 overall pick in the 2020 NFL Draft — will become the third quarterback from the draft class to start an NFL game.

No. 1 pick Joe Burrow lost in his Oct. 25 debut for the Cincinnati Bengals. Los Angeles Chargers quarterback Justin Herbert, the No. 6 pick, lost to the Super Bowl champion Kansas City Chiefs in his Sept. 20 debut.

Flores and the Dolphins had an extra week to prepare Tagovailoa for his first start, thanks to Miami’s Week 7 bye. The Dolphins’ coach expects his rookie quarterback to display sound fundamentals and technique and execute against the tough defense.

Part of the reason the Dolphins waited until Week 8 to start Tagovailoa was to give him time to watch and learn from veteran quarterback Ryan Fitzpatrick. Tagovailoa studied defenses and communicated with Fitzpatrick about how to attack and dissect NFL secondaries.

“You just don’t think [about only] what you know,” Tagovailoa said last week after he received the promotion. “You start thinking of what other people are doing — the defense [and] how they align to stack formations and how fronts can dictate coverages.

“[Those are] things that I didn’t really need to worry about in college — that I think of now. It really is about the little things.”

Another thing Tagovailoa didn’t have to think about before was being an underdog. The Rams are favored to beat the Dolphins, which makes Tagovailoa an underdog for the first time since his high school days in Honolulu.

Alabama was favored to win every game Tagovailoa started during his three years there, but NFL quarterbacks rarely are expected to win in their debuts.

Since 2011, drafted quarterbacks have a 24-44-1 record in their starting debuts, and many of those appearances came against less prominent units than the Rams defense Tagovailoa will battle.

While most quarterbacks don’t have a ton of success right out of the gate, hope exists for Tagovailoa.

Seattle Seahawks quarterback Russell Wilson — one of the players to whom scouts referred often when comparing the former Alabama quarterback to active NFL players during the draft process — had a disappointing debut as a starter, but came on strong.

The reasons for the comparison was that Wilson and Tagovailoa are very similar in stature, with Wilson just an inch shorter and a few pounds lighter than Tagovailoa. Both have a unique ability to extend plays.

Wilson had a tough matchup in his 2012 NFL debut when the Seahawks faced a Cardinals team that ranked No. 5 overall in passing yards allowed. He lost in his debut, but posted an 11-5 season record and made the Pro Bowl as a rookie.

Patrick Mahomes faced the No. 4 pass defense in the NFL when he made his debut as a starter in 2017. He led the Kansas City Chiefs to a victory in that game and became the NFL MVP the next season.

Tagovailoa will look to start a journey similar to that of Wilson and Mahomes on Sunday.

“You anticipate him going out there and seeing the defense, knowing where to throw the football and making good throws and making good decisions in the run game, as far as getting us where we’re supposed to get blocking-wise.

“I expect him to play excellent; but that’s the way I feel about every week going into every game. You think you’re going to play great. You’re disappointed when you don’t score every time.”