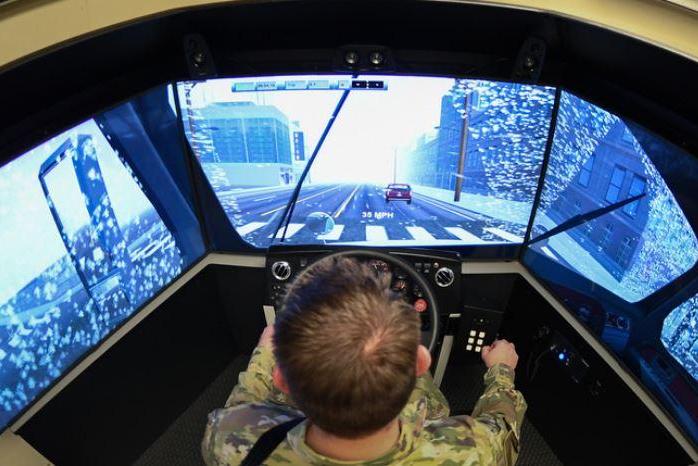 Jan. 6 (UPI) — Hill Air Force Base in Utah unveiled its new ground transportation simulator, the U.S. Air Force announced on Monday, to improve vehicle operation training and likely save tens of thousands of dollars along the way.

Weather, road conditions, visibility and equipment malfunctions are pre-programmed to offer practice in varying situations and better prepare them for when they’re behind the wheel of the real thing.

“The biggest thing this will do is get people used to a vehicle before getting in that vehicle,” Chase Terry, vehicle operator training leader at Hill AFB, said in a press release. “Their training will be so much more successful if they have a general knowledge of how a vehicle works before actually trying to drive. It’s crazy just how much they learn on this simulator and how proficient they become before even getting behind the wheel of a real vehicle.”

MSgt. Stephen Baskiewicz, ground transportation section chief at the base, estimated that the simulators will save between $ 50,000 and $ 100,000 annually in preventative maintenance costs, fuel savings and repair costs.

Airmen previously acquired their training by simply driving on roads, a time- and resource-consuming process that carries additional risks. The difference in drivers who train on the new system and those who don’t was called “mind-blowing” by Terry.

Ramstein Air Base, in Germany, installed a similar simulator in August 2019.

“This is a more timely and effective way to train, as opposed to actually having to go out, check out and operate a vehicle for hours on the road,” said Tech Sgt. Nicholas Lindke, the squadron’s training validation and operations supervisor at Ramstein.