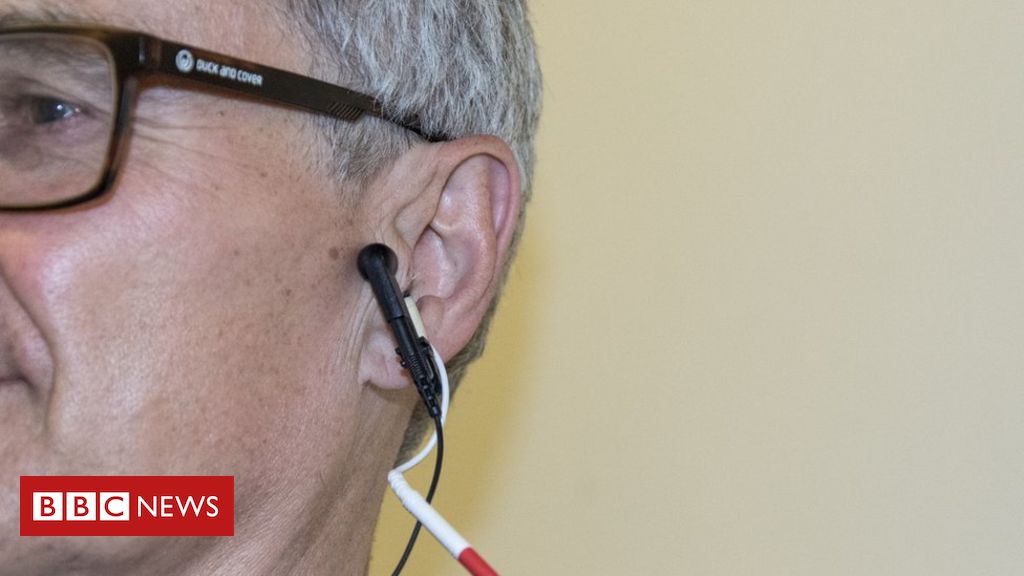 Tickling the ear with a small electric current could rebalance the nervous system in over-55s and help them age more healthily, research suggests.

Stimulation of the vagus nerve, which connects to the heart, lungs and gut, led to improvements in body, sleep and mood, a small study found.

The University of Leeds team said the procedure could make a big difference to people’s lives.

But more research is needed to work out the long-term health effects.

The ear acts as a gateway to the body’s nervous system.

One small branch of the vagus nerve can be stimulated via the skin in specific bits of the outer ear.

To some people, the therapy feels ticklish. To others, it’s painless.

Also called the “wandering nerve”, because it’s long and well-connected, the vagus nerve transmits information from the brain to organs around the body, such as the heart and lungs.

It is also fundamental to the body’s autonomic nervous system.

This system, which has branches known as sympathetic and parasympathetic, controls many of the body’s functions, such as breathing, digestion, heart rate and blood pressure.

Does the nervous system change as we age?

Yes. As we get older, the balance of the body’s nervous system goes awry.

The sympathetic branch, which helps the body prepare for high intensity “fight or flight” activity, begins to dominate.

And the parasympathetic branch, which is important for “rest and digest” activity, becomes less active.

This makes people more prone to diseases, such as heart problems and hypertension, as well as depression and anxiety.

What did the study do?

It attempted to see if this balance could be restored by stimulating the vagus nerve at the ear.

The researchers gave 29 healthy volunteers aged 55 and over transcutaneous vagal nerve stimulation for 15 minutes a day for two weeks.

What did scientists find?

People who showed the greatest imbalance at the start of the study improved most after receiving the therapy.

Some people also said their mood had improved and they were sleeping better.

What do experts say?

Study author Dr Beatrice Bretherton, from the school of biomedical sciences at Leeds, said: “These results are just the tip of the iceberg.

“We are excited to investigate further into the effects and potential long-term benefits of daily ear stimulation, as we have seen a great response to the treatment so far.”

She said the plan was now to see if the therapy could benefit particular disorders, such as heart failure, depression and irritable bowel syndrome.

But Dr David Clancy, from Lancaster University, said testing a sham version of the therapy on a control group would have made the results more robust.

“The people who took part were sat in a quiet, temperature-controlled room, and were reclined semi-supine on a couch for the duration of each experiment – I suspect many of us may have found our relaxation and wellbeing improved under such conditions,” he said.