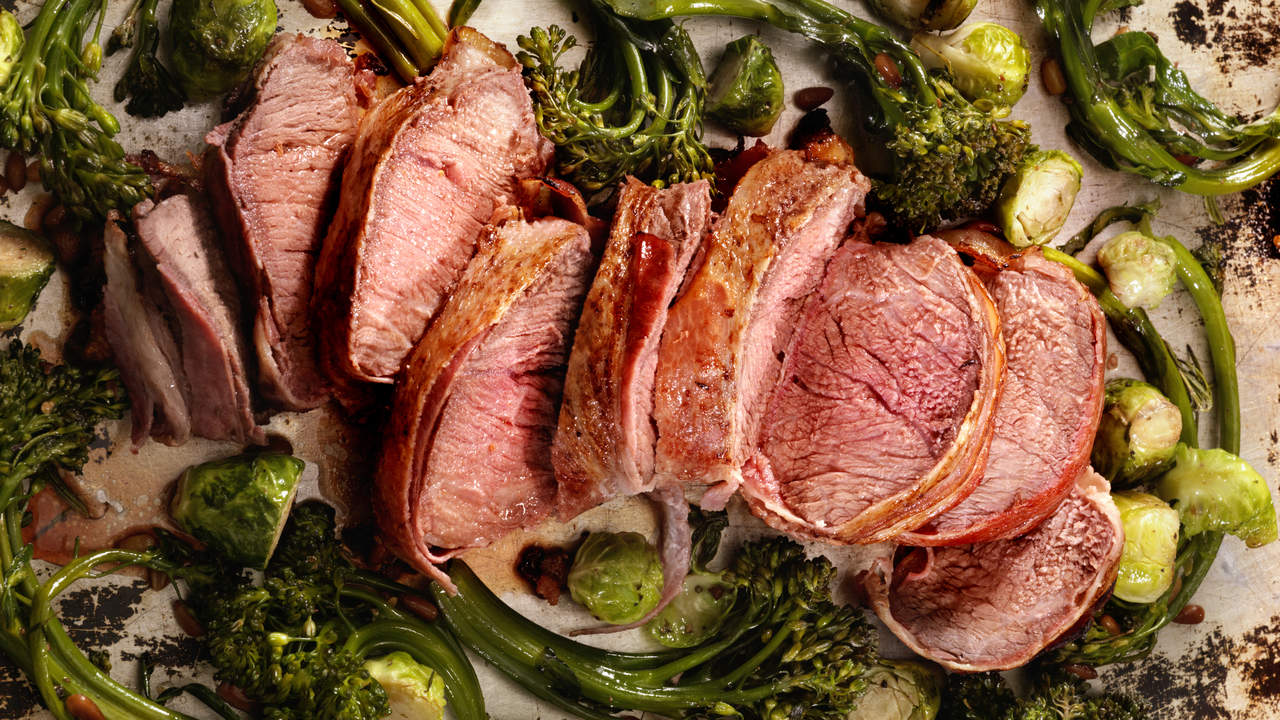 Maybe you’ve finally gotten used to busting out the sheet pan when you are in a recipe rut, or super-short on time. And perhaps you already know that you can make top-notch granola with it, or roast a whole head of cauliflower on it.

But consider this: You can make a whole meal on a baking sheet, no matter your dietary preferences or restrictions. Cooking chicken? Great. Add chopped potatoes and leeks to the pan, too. Got halibut you’re wrapping in parchment? Consider the starches and veggies you might nestle around it. If you’re heating up that oven anyways, you might as well employ all its power, conserving energy.

As you get more familiar with tucking one favorite dish in with another, you’ll start noticing which flavors have crossover potential for vegetables and proteins alike: If chicken is going into that oven seasoned with harissa, olive oil, and salt, remember that potatoes also do well with those flavors. If you’re making an Asian-inspired pork dish using a hoisin marinade, consider which produce might favor those elements—hello, broccoli!—and go for it.

While amping up your creativity, consider your go-to spices plus the baking temperatures of your favorite recipes. And don’t forget: Among the many charms of the sheet pan is its quick cleanup potential. Here are some notions to get you cracking.

When making this delicious halibut recipe, in which the fish gets tucked into parchment paper to keep it moist, why not add Brussels sprouts to that 450-degree oven, too? If you keep their seasoning fairly neutral, you can keep everything together. Just toss the sprouts with canola oil and salt, cut them in half, and place them face-down (as is done here) starting them half an hour before the fish.

Lean pork tenderloin can marinate overnight, then cook up in just half an hour in a 400-degree oven. Consider this recipe, setting aside extra hoisin-honey sauce, and arranging a whole head of broccoli florets and thinly sliced stems (tossed with a bit of olive oil and salt) on the pan alongside the meat. Not only will the crucifer soak up the tenderloin’s juices, but when it’s good and crispy at the end of cooking, you can toss it with the hoisin-honey sauce. It’s the sort of easy homemade Chinese dish you’ll find sneaking into your weekly repertoire. (Pro tip: For extra flavor, sear the tenderloin in a skillet first. It’s an extra dish to wash, but it’s worth it!)

Food writer Melissa Clark is famous for her Instant Pot savvy and skill with spatchcocked chickens (which you can also plop on a sheet pan,) but this recipe has a cult following. Chicken thighs and drumsticks nestle next to creamy Yukon gold potatoes and leeks perked up with lemon zest and olive oil. The chicken and potatoes get a fabulous kick from harissa, a Middle Eastern spice mix (and sometimes paste) generally comprising chiles, garlic, cumin, coriander, and caraway. Super-savory, smoky and sensuous, it’s the sort of spice that once you’ve had a taste, you’ll be dousing everything in it.

Eat clean (and save money!) with our 30-Day No Takeout Challenge With Giada DeLaurentiis!

If you haven’t pressed and dried tofu, some might argue you’ve never really tried tofu. Baking the soy protein dries it out even further, which amplifies its silky texture while also making its texture denser and more meat-like. This recipe utilizes miso paste, a delightful thing to have in the fridge for stir-fried collards, soups, glazes, and pretty much almost any Japanese or Chinese dish you concoct. Swap out the baking dish for a baking sheet, and surround the tofu with shaved Brussels sprouts you’ve tossed with grapeseed or olive oil and salt. Toss the sprouts occasionally; and when they’re crisp but not completely black, toss them with the miso marinade you used on the tofu.

Once you’ve started making your own pizza, whether from store-bought dough or homemade dough, it’s quite difficult to go back to even the best frozen brands. We especially love when a pizza delivers plenty of protein and produce along with that lovely crust. This smoky eggplant-provolone number delivers on that, and it is divine. You might need one extra bowl or an additional sheet pan, but the cleanup is still minimal. Roasting eggplant sweetens it, and fresh basil adds a pizzeria-worthy brightness. You could serve this to guests and they’d be happy.