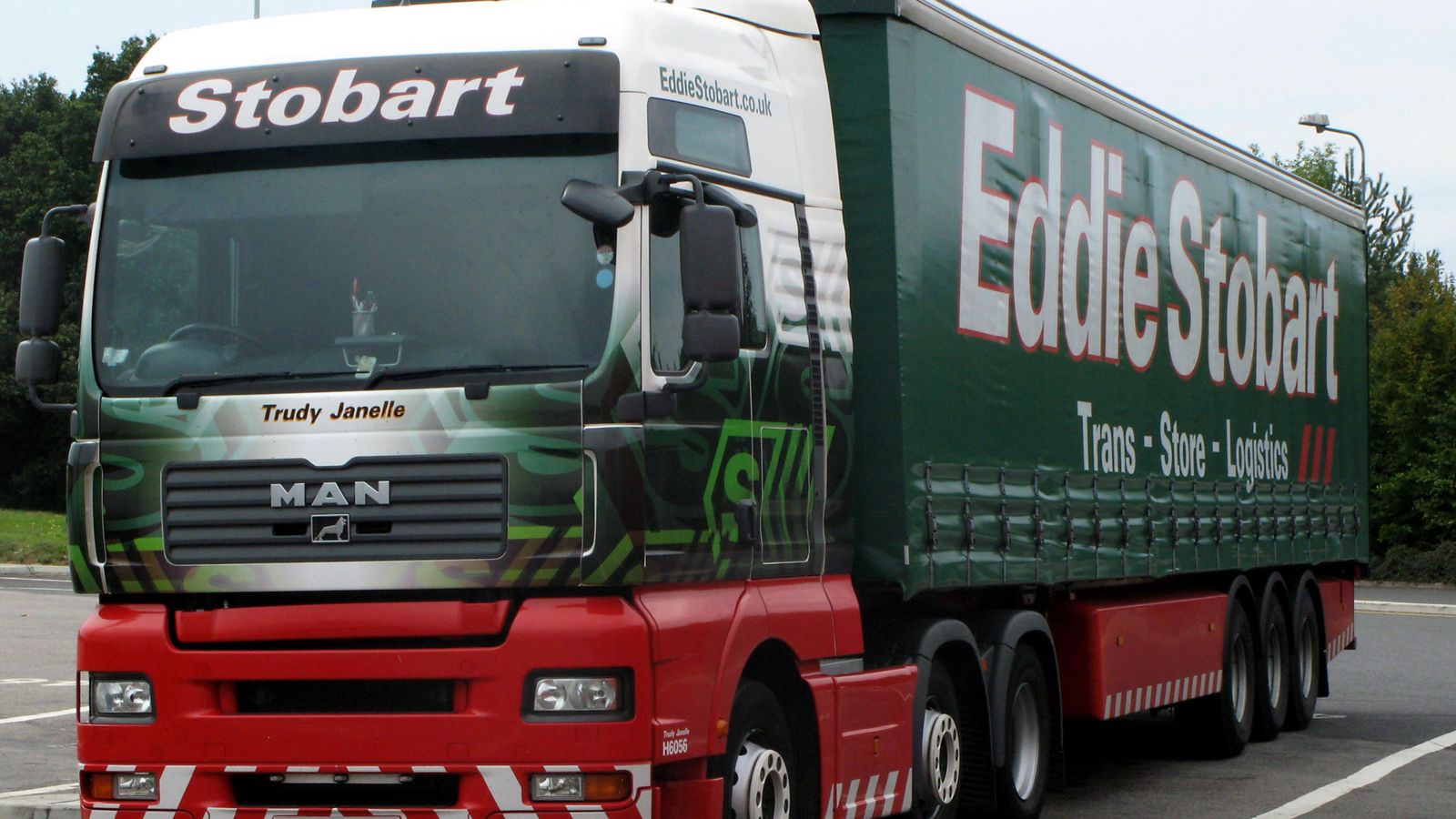 A bitter fight for the future of one of Britain’s biggest distribution companies will draw in the City mergers watchdog on Monday just days before shareholders vote on a controversial takeover bid.

Sky News has learnt that advisers to Andrew Tinkler, the former boss of Eddie Stobart Logistics during its ownership by Stobart Group, will lodge an appeal with the Takeover Panel aimed at preventing DBAY Advisers from voting on 6 December in favour of its own rescue bid.

Sources said on Sunday evening that Mr Tinkler’s vehicle, TVFB, had acquired a 6.5% stake in Eddie Stobart Logistics on Friday in an effort to build momentum behind his own refinancing proposal.

The developments represent the latest twists in an unexpectedly complex battle for control of a company which has been mired in financial crisis and scandal for months.

Without some form of rescue refinancing, Eddie Stobart Logistics – best-known for its vast fleet of red-and-green lorries – will crash into administration weeks before Christmas, putting 6,000 jobs and hundreds of thousands of festive deliveries at risk.

TVFB wants the Takeover Panel to rule that DBAY and William Stobart, who are acting in concert, to be blocked from voting the roughly 30% stake that they collectively hold.

In total, they need approval from just over 50% of shareholders to secure their deal, which will involve acquiring control of Eddie Stobart Logistics’ assets in return for a £55m high-interest loan.

The DBAY proposal has the backing of the company’s lenders, and has won support from proxy advisers, but has drawn a furious response from independent shareholders who would be left with little value from their stakes in the business.

It was unclear whether the Takeover Panel would seek to intervene because the DBAY proposal involves an offer for Eddie Stobart Logistics’ assets rather than its share capital.

The DBAY plan would see the company remaining listed but with no exposure to the existing Eddie Stobart Logistics assets.

Eddie Stobart Logistics said on Friday that its lenders were not prepared to extend financing to the company in order to allow Mr Tinkler or any other bidder to formulate an offer.

The company’s shares were suspended at 70p during the summer with PricewaterhouseCoopers, its auditor, unwilling to sign off its half-year results amid evidence of accounting irregularities.

Sources that its results for several prior years – when DBAY owned the company – would also need to be restated.

Under TVFB’s proposal, Mr Tinkler would be installed as Eddie Stobart Logistics’ executive chairman, with the company continuing to be listed on the London stock market.

TVFB is expected to say in a stock exchange announcement on Monday that it would sponsor an £80m share placing and open offer that would allow smaller shareholders to participate at a price of 5p-a-share.

That compares to the £55m of liquidity that would be provided by DBAY.

However, even if Mr Tinkler wins investor support for his plan at Friday’s EGM, Eddie Stobart Logistics’ lenders could still hand the company to DBAY by forcing it through a pre-pack administration process.

DBAY’s effort to take control of Eddie Stobart Logistics is controversial because the investor reaped a huge windfall when it floated the company at 160p-a-share in 2017.

Eddie Stobart’s lenders recently drafted in Alvarez & Marsal (A&M) to advise them on the restructuring.

Deloitte is working alongside bankers at Rothschild on the discussions about the company’s future.

Eddie Stobart had net debts of about £155m at the half-year stage, with some of the proceeds of TVFB’s fundraising expected to be used to reduce these borrowings.

DBAY Advisors bought 51% of Eddie Stobart from Stobart Group when Mr Tinkler was running the combined entity five years ago.

Eddie Stobart’s descent into crisis prompted the ousting of its chief executive, Alex Laffey, and the installation of Sebastian Desmareux as his interim successor.

Mr Tinkler, who has won support from a combination of existing and new Eddie Stobart Logistics shareholders for his proposal, still owns about 5% of Stobart Group, which owns Southend Airport.

To complicate matters, Stobart Group, which is said to be supportive of TVFB’s proposal, also has an economic interest in its former sister company.