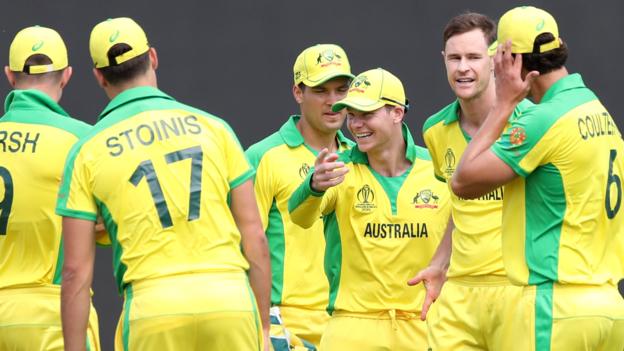 England fell to a 12-run defeat by Australia in a thrilling World Cup warm-up match in Southampton after Steve Smith’s first century since being banned for his part in the ball-tampering scandal.

James Vince and Jos Buttler struck fine fifties to seemingly put England on course for victory, only for Australia to regularly peg the hosts back.

Needing 15 off the last over, England lost their two final wickets to end a disappointing and disjointed chase.

England, who also sustained a series of injury worries, face Afghanistan in another warm-up on Monday before facing South Africa in Thursday’s World Cup opener.

Defending champions Australia begin their campaign against Afghanistan on 1 June after a warm-up match against Sri Lanka on Monday.

Even in an unofficial match with relaxed rules – Australia named a team of 12 and England were able to bring in substitutes for injured players – the hosts were expected to comfortably chase down a target of under 300.

The pitch offered some variable bounce, with both openers Jason Roy and Jonny Bairstow caught off miscued shots, and off-spinner Nathan Lyon was especially canny – but England will be frustrated to have fallen short, even if the result is not likely to have much of an impact on their World Cup campaign.

Buttler changed the tempo of the chase in the 27th over by smacking Nathan Coulter-Nile for 24 off six balls, including two brilliant sixes down the ground and over square leg.

He surged to 52 off 30 balls, only to fall to the next delivery when he tamely chipped Coulter-Nile to Usman Khawaja – before Vince guided the ball straight to Lyon in the trap at short third man for 64.

But once both had departed, Adil Rashid and Jofra Archer – who were both only batting because of injuries – had no chance, and clearly hampered Archer was run out trying for two in the game’s final act.

A day after England were relieved to find Eoin Morgan’s small finger fracture will not keep him out of Thursday’s World Cup opener against South Africa, they had several injury concerns arise in Southampton:

Root was also called into action despite not being due to play following the death of his grandfather two days ago.

Smith played a superb anchor innings, moving to off to clip away anything on his pads, or angling the bat to guide the ball either side of point.

He hustled between the wickets to ensure he kept his strike-rate up near a run a ball, before a late flourish saw him hit a six over point and another with a pre-meditated scoop over the keeper.

A customary tap into the leg side brought up his hundred, marked with a fairly muted celebration as applause and boos blended, before he finally fell to a contentious decision – the third umpire deciding that his chip to Tom Curran had not hit the pitch first.

Such knocks will have limited effectiveness if the other batsmen cannot kick on – Alex Carey’s 30 off 14 balls the only fluent innings elsewhere – while Australia still look unsure of their best line-up, though it proved enough here.

That was also due to Lyon’s miserly spell of 1-37 off 10 overs that ensured England never got away, ably supported by Zampa’s 1-54.

Seamers Kane Richardson and Marcus Stoinis also executed superbly in a tense finale and, with fast bowlers Pat Cummins and Mitchell Starc to return, this will surely give Australia confidence they can defend totals that look under par.

‘England will be disappointed’ – what they said

“None of them were bowled out. They all got out. 10 batsmen had a chance to win the game and none of them did it. That will be a talking point in the debrief.”

England batsman James Vince: “We’re disappointed not get over the line but it is a warm-up game and a lot of the guys got something out of it. The wicket was a bit two-paced but I managed to get a few runs to my name which was nice.”

On Jos Buttler’s innings: “He took all the pressure off us. He hit something like 50 off 30 balls to bring the rate back down to a run a ball. We should have kept a few more wickets in the hutch afterwards but that innings from Jos was outstanding.

Australia captain Aaron Finch: “Our fielding was sloppy, it was not the standard we want to set for ourselves. But overall the way we batted was a good effort.

“It just shows the importance to have that in-batter. I thought Steve Smith played a really impressive knock.

“The wicket got a bit slower and drier. Nathan Lyon bowled a beautiful spell, great line and length. Overall it was a pretty good wicket, with just enough there for everyone.”