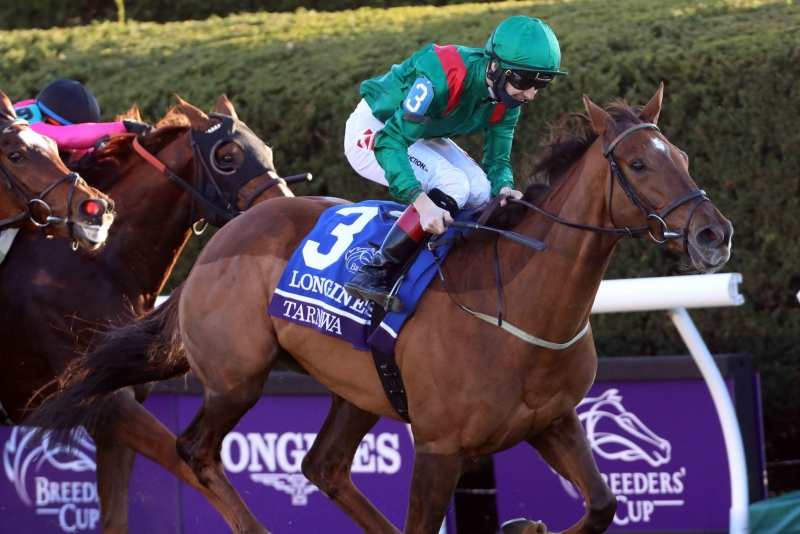 Keeneland’s firm turf was especially kind to horses coming out of races over the soft-going in Paris a month earlier.

It was a tough day, though, for jockey Christophe Soumillon, who was sidelined because of a positive COVID-19 test. Two mounts Soumillion relinquished went on to victory.

Tarnawa, an Irish-bred filly owned and bred by the Aga Khan, completed the sweep of the Breeders’ Cup’s big turf races with a late-running, 1-length victory in the 1 1/2-miles Turf.

Magical, second in the 2018 Turf at Churchill Downs, was second again with Channel Maker third as the only U.S. finisher in the top five.

Tarnawa, trained by first-time Breeders’ Cup winner Dermot Weld, was far back in the 10-horse field turning for home, but jockey Colin Keane, subbing for Soumillon, had the filly in full flight outside rivals and got home with a perfectly timed effort.

“I was following the right horses before we turned in,” Keane said. “And then she was on her way. Mr. Weld told me to keep her on the inside or the outside, but not in between them.”

“When I saw him pull her out [for room], it was like a jet taking off on a runway,” said Mark Weld, Dermot’s son.

Tarnawa came into the race off back-to-back victories in the Qatar Prix Vermille and Prix de l’Opera Longines in Paris, both Group 1 events.

Ireland’s master trainer Aidan O’Brien swept the top three placings in the Mile but not, obviously, in the fashion he expected.

Somewhat shockingly, Order of Australia came running late to win by a neck over Circus Maximus and another 3/4 length from Lope Y Fernandez, all owned in whole or in part by the Coolmore combine and all trained by O’Brien.

Order of Australia was the relative ugly duckling of the bunch. He only drew into the race with the scratch of another trans-Atlantic traveler, One Master.

Then his original jockey, the luckless Soumillon, was set down by the pandemic protocols, with Pierre-Charles Boudot taking the mount on the eventual winner, who went to the post at odds of 73-1.

The best the American runners could do was Ivar, a Brazilian-bred, who finished fourth, and Uni, a Chad Brown trainee.

Boudot rode Order of Australia masterfully, getting him out of the No. 14 gate quickly and over toward the inside, where he took a comfortable place just behind the leaders.

He made his move at the top of the lane and his stablemates could not quite catch him at the end as the 3-year-old Australia colt finished in 1:33.73.

“The draw was bad but the trip was perfect,” Boudot said. “Aiden told me to get a good spot and he’s a proper horse for the mile.”

O’Brien’s confidence apparently was based on the colt’s fourth in the Dubai Duty Free Irish Derby and seventh in the Prix du Jockey Club or French Derby. He had not run as short as a mile since his first career start. Circus Maximus and Lope Y Fernandez, by contrast, are both Group 1 winners.

The winner is a grandson of Coolmore’s superstar stallion, Galileo. Both Circus Maximus and Lope Y Fernandez were sired by Galileo himself.

This year’s Filly & Mare Turf appeared on paper to be a bit light for the international brigade, with only three of the 14 starters coming from across the pond and some of Europe’s best going in other races.

Still, it was England’s Audarya running down American star Rushing Fall in the final strides to win by a neck in course-record time of 1:52.75 for 1 3/16 miles.

Audarya, a 4-year-old, French-bred filly by Wootton Bassett, came to the Breeders’ Cup after a victory in the Group1 Darley Prix Jean Romanet on Aug. 23 and a close third in the Group 1 Prix de l’Opera Longines Oct. 4.

Her regular rider, Ioritz Mendizabal, also was sidelined by the pandemic, and Boudot inherited the mount.

“I didn’t worry about that,” winning trainer James Fanshawe said. “We had no choice. And, what a fantastic ride. Somehow he got her to the inside [from the No. 11 gate], and she’s been running on very soft ground in Europe.”

Explaining the decision to come to Keeneland, Fanshawe said, “She just kept improving, race after race. … After that, the pacing was perfect so we said, ‘Let’s go to the Breeders’ Cup.’ I’ve never been here before.” He said he expects Audarya to remain in training as a 5-year-old.

Rushing Fall, expected to be the best of turf expert trainer Chad Brown’s contingent, held a narrow lead in the stretch before yielding grudgingly. She had won seven of her last nine starts, including her last three, before Saturday’s race.

Starship Jubilee stumbled at the start, unseating rider Florent Geroux. Outriders collared the horse and Geroux was quickly up after the stumble, neither injured.

The $ 1 million Grade I Turf Sprint

Glass Slippers got things off on the right hoof for the European raiders in the Turf Sprint. With Tom Eaves riding for trainer Kevin Ryan, the 4-year-old Dream Ahead filly raced in mid-pack until the top of the stretch, threaded a needle between horses a furlong out and ran on to win by 1/2 length.

Wet Your Whistle and Leinster were second and third, respectively, in the 5 1/2-furlong dash, timed in 1:01.53.

Ryan said Glass Slippers “trained for the second half of the year,” a statement borne out by the record. She won the Group 1 Derrinstown Stud Flying Five Stakes in Ireland and finished second in the Group 1 Prix de l’Abbaye de Longchamp on Arc day in Paris in her last two starts.

“Every day we’ve been happier and happier with her,” the trainer said.