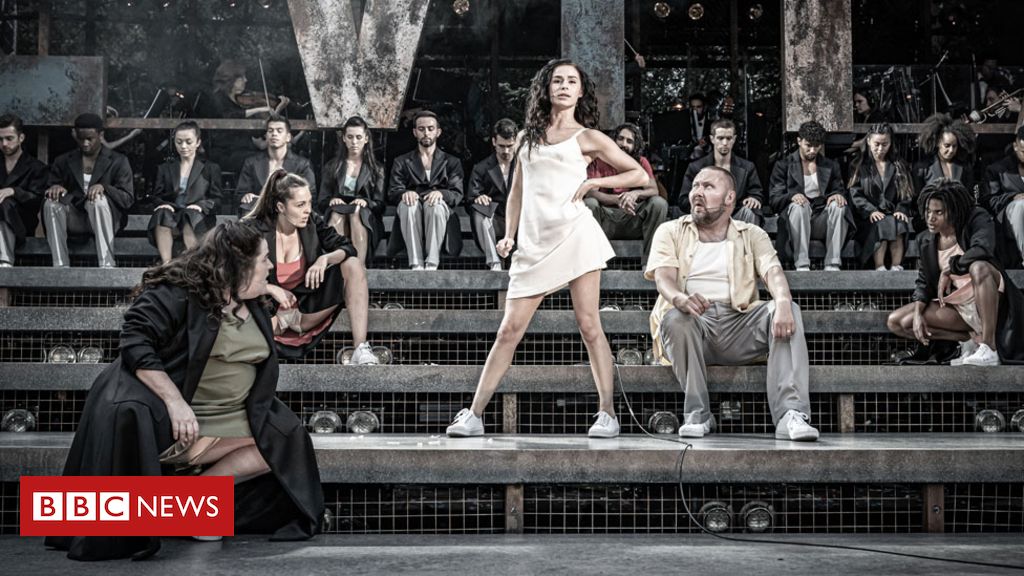 The director of a new staging of Evita says its depiction of a populist leader and his wife has parallels with some of today’s political personalities.

“We clearly have a strange desire for big characters in politics in the UK and US,” said Jamie Lloyd. “Charismatic despots are back in fashion.”

Evita, written by Andrew Lloyd Webber and Tim Rice, tells of Eva Peron, first lady of Argentina from 1946 to 1952.

The show has many fans, among them US president Donald Trump.

In his 2004 book Think Like a Billionaire, Mr Trump called Evita his “favourite Broadway show” and said he had seen it six times.

First staged in 1978, Evita was Lloyd Webber and Rice’s third hit musical after Joseph and the Amazing Technicolor Dreamcoat and Jesus Christ Superstar.

Productions of all three shows are currently running in London – something Sir Tim said was “amazing” after Evita’s opening night at the Open Air Theatre in Regent’s Park.

Known for such songs as Don’t Cry For Me Argentina and Another Suitcase in Another Hall, the original London show ran for eight years and made Elaine Paige a star.

Patti LuPone played Eva when the show opened in Broadway in 1979, while Madonna played the lead in the 1996 film version.

The late Harold Prince directed the original production, which famously had Eva singing from a balcony in a flowing white gown.

Jamie Lloyd, in contrast, opts for a pared-down approach, dressing his Eva – played by Samantha Pauly – in a white slip dress and sneakers.

Other innovations include pom-poms, hand-held microphones and choreography that combines tango and twerking.

“It’s unlike any other production and it’s good for that reason,” Sir Tim told the BBC. “When a piece has been round a long time it’s nice to see different versions of it.”

Speaking on Thursday, Lloyd said he had aimed to capture the “energy and colour” of a political rally in his revival.

Smoke flares, streamers, fireworks and confetti feature in a production described as “expressive and explosive” by the Evening Standard’s Nick Curtis.

“When Trump has been doing his re-election rallies, there’s been this extraordinary sense of circus and pantomime,” said the director.

“That’s been our impulse with the pyrotechnics, confetti cannons and balloons. It gives you the feeling of being at a pop concert.”

The US actress said she was “excited” to play the role again as she knew Lloyd’s production would be “completely different” to what she had done before.

“I’ve done the big white ball gown, the blonde wig and the eight costume changes,” she told the BBC. “It’s easy to go on autopilot.

“I was interested in stripping things back to reveal the complexity of the woman beneath the wigs and the dresses,” said Lloyd, who will next be directing James McAvoy in Cyrano de Bergerac.

“A lot of my work is concerned with getting inside the heads of various unpleasant people, and I’m not shying away from the fact that Eva can often be horrendous.”

Yet The Guardian’s Arifa Akbar was less effusive, saying that while the show has “a sense of the grand… it never quite has enough heart“.

Evita runs at the Open Air Theatre in London until 21 September.