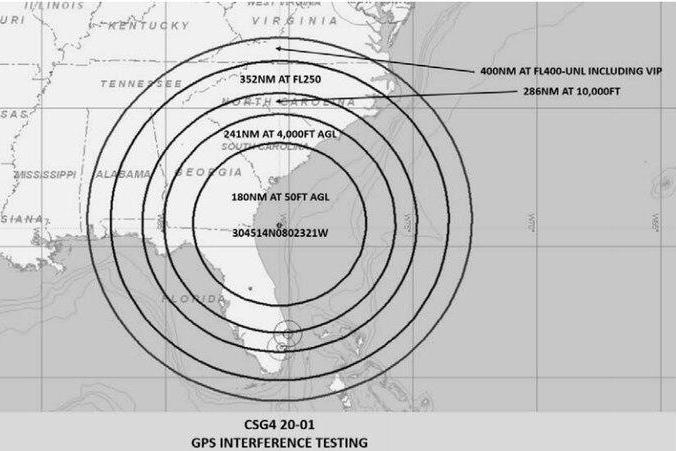 Jan. 17 (UPI) — A military training exercise scheduled for this weekend could jam GPS signals in the Southeast and Caribbean, according to the Federal Aviation Administration.

An FAA advisory warns pilots could experience “unreliable or unavailable GPS signal” during a training exercise scheduled for Jan. 16 through Jan. 24.

The U.S. Navy’s Carrier Strike Group Four will be conducting GPS testing exercises off the coast of Georgia, causing likely disruptions as low as 50 feet above ground level within 207 miles of the test location — and as high as 40,000 feet within 460 miles.

“The Global Positioning System (GPS) constellation is provided by the Department of Defense (DoD). Routine testing is conducted on the GPS,” an FAA representative told Military Times. “The FAA issues advisories to inform operators that they may experience interference with or disruption of their GPS navigation systems in the vicinity of the testing.”

The FAA encourages pilots to report anomalies on its online reporting form and check for updates.