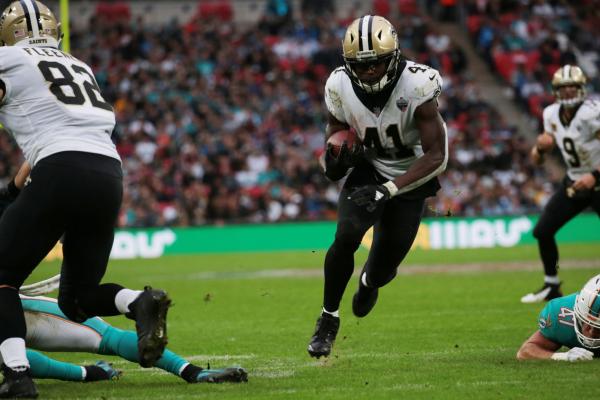 Oct. 3 (UPI) — More devastating injuries pave the way for the best players to add and drop for Week 5 of the fantasy football season.

There are also several players not playing up to their draft position. Oakland Raiders quarterback Derek Carr and Tennessee Titans quarterback Marcus Mariota also suffered injuries in Week 4, so you might need to eye replacement options for several starter spots for your Week 5 lineup.

Cincinnati Bengals quarterback Andy Dalton had a terrible start to the season but rebounded in a big way in Week 4 against the Cleveland Browns. Dalton completed 83.3 percent of his throws for 386 yards, four touchdowns and no interceptions. He looks to be morphing back into a streaming option and has several upcoming matchups on the schedule worth your time. The Bengals have a tough Week 5 game against the Buffalo Bills followed by a bye week. After Week 5, Dalton gets the Pittsburgh Steelers and Indianapolis Colts. Dalton is more of a long-term option if you are in a bind at the position. You could get lucky and scoop him up from an owner who gave up on him earlier in the season.

Minnesota Vikings running back Latavius Murray is going to be trusted with a much bigger load for the rest of the season after the team lost rookie Dalvin Cook to injury. He isn’t a game-breaker but he can get you some consistent points based on the strategy of this offense. He should have some room to run with the Vikings’ upcoming schedule including the Chicago Bears and Green Bay Packers. Murray is a low-end RB2 in deeper leagues.

Alvin Kamara might be the most exciting weapon in the New Orleans Saints’ backfield. The rookie tail back is seeing and increased role in the offense and had a great game in Week 4 as a receiver, catching 10 passes for 71 yards and a touchdown. He is the epitome of a fantasy football lottery ticket. Stash Kamara on your bench. He is only worth starting consideration as a flex in super deep leagues.

Will Fuller is finally back for the Houston Texans and he had a fantastic Week 4 debut. Fuller pulled in two touchdowns and had 35 yards on four catches against the Tennessee Titans. He’ll be a great complementary target to DeAndre Hopkins for rookie Deshaun Watson. Fuller should be on your WR3 radar for the rest of the season with his speed and nose for the end zone.

Cincinnati Bengals tight end Tyler Kroft played his way into more playing time in Week 4. The third-year pass-catcher scored two touchdowns and had 68 yards on six receptions against the Cleveland Browns. He’ll be on the field for the foreseeable future with Pro Bowler Tyler Eifert shelved with another injury. Kroft is worth a streaming play in deeper leagues with tight end slots.