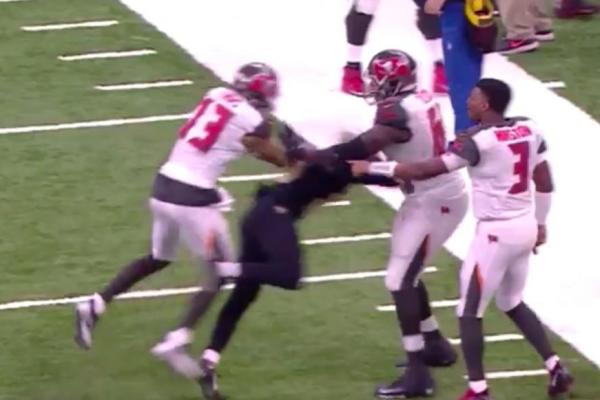 Nov. 6 (UPI) — The Tampa Bay Buccaneers will be without Pro Bowl wide receiver Mike Evans in Week 10 due to a one-game suspension.

NFL vice president of football operations Jon Runyan issued the suspension on Monday. The suspension is without pay for violations of unsportsmanlike conduct and unnecessary roughness rules in Sunday’s game against the New Orleans Saints.

Evans was involved in a scuffle in the third quarter of the 30-10 loss at the Mercedes-Benz Superdome. Buccaneers quarterback Jameis Winston poked Saints defender Marshon Lattimore in the back of the head during the sequence. Lattimore then shoved Winston. Evans came flying in from behind Lattimore and speared him in the back.

“I wanted to go at him,” Lattimore told reporters after the game, according to the New Orleans Times-Picayune. “So I was glad he wasn’t ejected.”

Evans told reporters after the game that he regretted the hit.

“I just let me emotions get the best of me,” Evans said, according to WTVT Fox 13. “It was something I shouldn’t have done. It was very childish.”

Runyan wrote a letter to Evans, notifying him of the ban.

“During the third quarter, after a play had ended, you struck an unsuspecting opponent in the back, knocking him to the ground,” Runyan wrote in the letter. “Your conduct clearly did not reflect the high standards of sportsmanship expected of a professional.”

A league source said that the wide receiver will appeal the suspension, per the collective bargaining agreement.

Evans, 24, must be benched for Week 10 in all fantasy football lineups. He has just one catch for 13 yards in Sunday’s loss. Evans has 532 yards and four touchdowns on 40 catches this season for the Buccaneers.

The Buccaneers’ passing game is now a situation to avoid. Ryan Fitzpatrick will start Sunday’s game, as Winston deals with shoulder issues.

DeSean Jackson is the Buccaneers’ No. 2 wide receiver, but he won’t receive an upgrade because of Evans’ possible absence. Jackson is a boom-or-bust WR3 in deeper leagues.