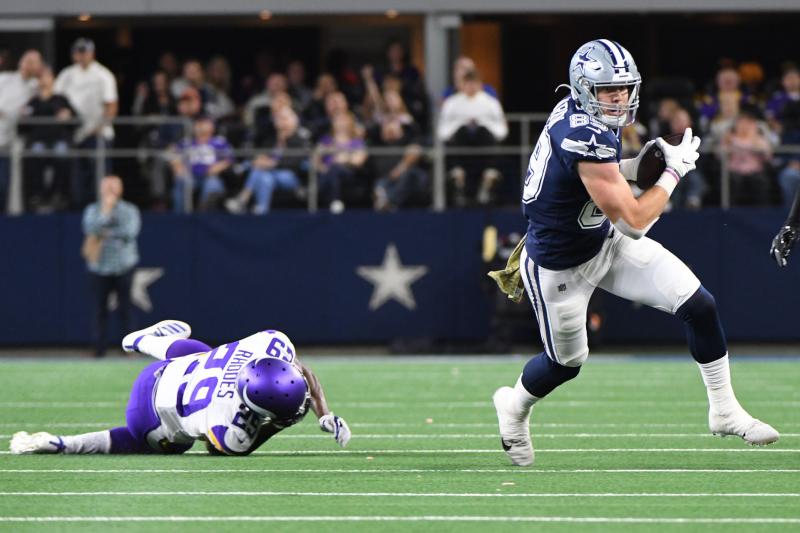 If you are in a league that requires starting a tight end, other great options are available this week. Take a look at my weekly waiver wire article if you need a replacement for your normal starter. My top 20 rankings can help you decide between two options to add to your starting lineup.

You also should remove Green Bay Packers, New York Giants, Seattle Seahawks and Tennessee Titans players from your lineup, as those teams have Week 11 byes.

Here are some of my favorite players in this week’s top 20 rankings:

New Orleans Saints veteran Jared Cook lands at No. 4 in my weekly tight end rankings. Cook hauled in a season-high six catches for 74 yards in Week 10 and should have even more success in Week 11 against the Tampa Bay Buccaneers. The Buccaneers are allowing the second-most fantasy points per game to tight ends in 2019. I expect the Buccaneers defense to focus on stopping the Saints running game and wide receiver Michael Thomas, leaving Cook open on shorter routes. He should be in all lineups for leagues that require starting tight ends, but makes decent flex play in deeper leagues as well.

Greg Olsen had a season-high eight grabs for 98 yards in Week 10. The Carolina Panthers veteran lands at No. 8 in my Week 11 tight end rankings. Olsen’s only scores of the season came in Week 3, but I think he rebounds in the touchdown department this week against the Atlanta Falcons. The Falcons have been very average in defending tight ends this season, allowing 439 yards and four scores in nine games, but have allowed solid fantasy football performances to the position in four of their last five games. I expect Olsen to be a very dependable fantasy football option going forward, but especially in this matchup.

Indianapolis Colts tight ends should find success in Week 11 against the Jacksonville Jaguars, a unit tied for allowing the fourth-most touchdowns to the position. I like Eric Ebron more than Jack Doyle this week because of his red zone usage. Ebron has more red zone targets and overall targets than Doyle this season. Ebron hasn’t scored since Week 7 but has a great chance of scoring his fourth touchdown of the season against the Jaguars. I have Ebron as my No. 9 tight end for Week 11.

Dallas Cowboys star Jason Witten rounds out my top-10 tight ends for Week 11. Witten only posted 17 yards last week against the Minnesota Vikings, but should find much more success this week against the Detroit Lions. The Lions are allowing the eighth-most fantasy points per game to the position. Start Witten if you are in a league that requires starting tight ends.

The name Ross Dwelley wasn’t on any fantasy football player’s radar entering the 2019 season, but the San Francisco 49ers tight end should be a viable option in Week 11. Dwelley deserves a look if your normal starter is on a bye and you are in a league that requires starting tight ends. He will have a great opportunity for production in Week 11, as 49ers star tight end George Kittle is dealing with a knee injury. Dwelley stepped in and had three catches for 24 yards in Week 10 against the Seattle Seahawks. I like his chances to score in Week 11 against the Arizona Cardinals, a unit that has allowed the most touchdowns, catches and yards to opposing tight ends. The Cardinals are also allowing the most fantasy points per game to the position. Dwelley is a solid play if Kittle is ruled out and you are in a pinch.

Cincinnati Bengals tight end Tyler Eifert is another player worth a look due to a great matchup. The Bengals are facing the Oakland Raiders, a defense allowing the third-most fantasy points per game to tight ends. Eifert scored his second touchdown of the season in Week 10. I expect a ton of targets for the Bengals tight end against the Raiders, as the AFC North squad works to groom rookie quarterback Ryan Finley.