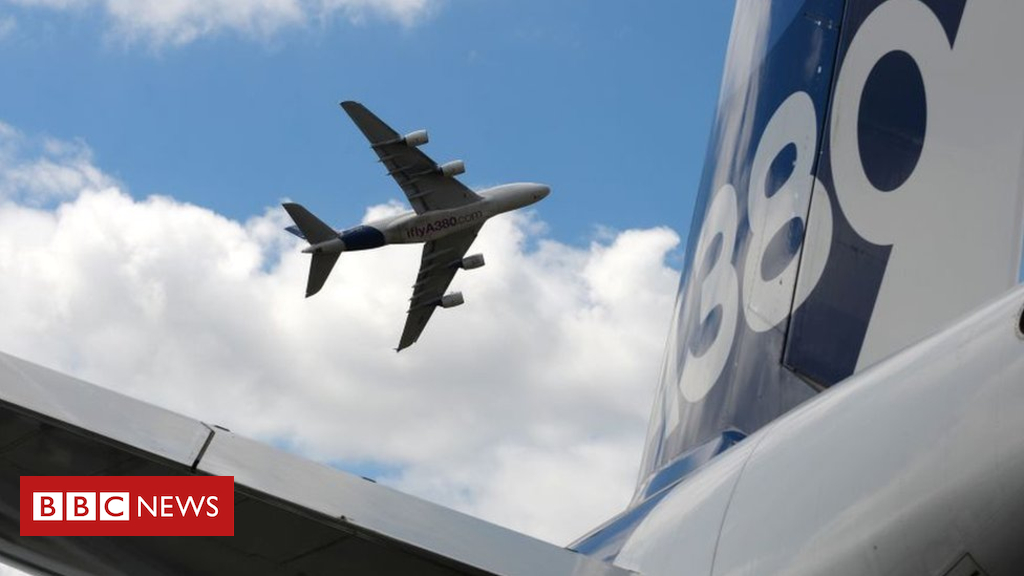 The head of Airbus’ aircraft operations has mounted a strong defence of the troubled A380 super-jumbo jet, claiming its “best years are ahead of us”.

Tom Williams insisted the A380’s absence from the Farnborough Airshow had nothing to do with falling sales.

It’s the first time in more than a decade that the flagship aircraft has been absent from the global showcase.

Mr Williams, who also warned about a possible trade war, told the BBC Airbus decided to display its latest products.

An Emirates Airline order for A380s earlier this year has helped bolster the programme, but speculation about its future won’t go away.

The European aircraft manufacturer, whose wings are made in the UK, has become dependent on the Dubai-based airline to keep A380 production alive.

Mr Williams, chief operating officer for Airbus Commercial Aircraft, rejected suggestions that selling the A380 was just too hard.

“We are bringing the newest products [to Farnborough] to show them off, and there is a limit to how many aircraft we can bring.

“That doesn’t mean, by any means, that we have given up on the A380. We are still fully committed. It’s my personal belief that the A380 still has its best years ahead of us, which I think will come as we go into the next decade.”

The A380 debut was in 2005 at the Paris Airshow, and it showcased at Farnborough the following year.

But one of the costliest aircraft projects ever undertaken has been battling for customers ever since the first plane was delivered to Singapore Airlines in 2007.

Production has been cut several times as airlines shunned the plane due to high operating costs and competition from more efficient, but smaller, rival aircraft. Airbus is expected to make just eight A380s next year.

But Mr Williams believes a rise in global air travel over the next decade, coupled with increasingly congested airports, will help increase demand for the 550-seat A380.

Airbus had issued a stark warning about the consequences of a Brexit deal that could disrupt the movement of components and people around its pan-European operations.

“From an Airbus point of view I am very encouraged” by the Chequers statement, Mr Williams told the BBC.

“We also have to make sure we send the same message to the European Commission so that they understand the importance of finding a practical solution.”

He also warned about the consequences of a trade war between the US and China. Airbus has production facilities in both countries, and about a quarter of the aircraft it is currently building will go to Chinese customers.

“A trade war is in no one’s interests,” Mr Williams said. “It’s a zero-sum game.”