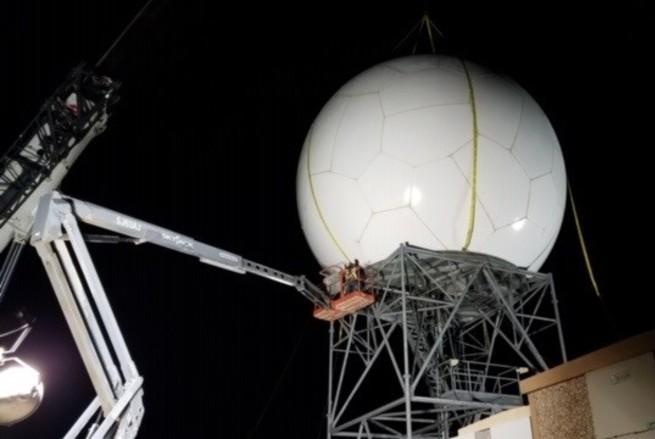 Next Generation Weather Radar is a Doppler system that measures motion of clear air and atmospheric phenomena within storms. They are used as part of forecasts for the U.S. Army, Air Force and National Weather Service. The non-military data are transmitted to local news outlets and the Federal Aviation Administration.

The announcement Wednesday on the first refurbished by the Air Force in February came as Tropical Storm Barry formed in the Gulf of Mexico and is forecast to hit land between Mississippi and eastern Texas as a Category 1 hurricane Saturday.

The U.S. Air Force is building a replacement system at its 25 locations in a U.S. government effort to standardize the 180 radars that build national weather and flight data for the NWS, FAA and U.S. military.

The cost to install the system is $ 138 million, including $ 20 million paid by the Air Force.

The effort can be difficult, and in some cases require strange scheduling — such as the radar at Cannon, which was installed entirely in one night.

“Individual radar replacements are labor intensive and they must be done right,” said Ricky Keil, who oversees the NEXRAD effort for Program Executive Office Digital at Hanscom AFB. “Oftentimes, crews must wait until wind dies down to raise the towers and place sensitive radomes. That means they’re working in the dark and the cold, on a piece of equipment that doesn’t forgive many mistakes.”

The Air Force program is managed at Hanscom Air Force Base in Massachusetts.

The NEXRAD network is essential to the Air Force, Dreher said, as the improved radars will allow the branch to issue severe weather warnings and advisories for the Department of Defense nationwide.

The NWS weather surveillance Doppler radars, or WSR-88, are perched atop metal frame towers. They resemble huge white golf balls — without the dimples — on giant tees.

Information can be read more than 120 nautical miles from the station. And rain, snow and other precipitation is spotted out to 248 nautical miles.

NEXRAD is land-based, but there is some radar coverage offshore, according to the National Oceanic and Atmospheric Administration, which oversees the National Weather Service. The greatest offshore coverage is along the Atlantic and Gulf coasts.

Hanscom Air Force Base is working to update components that include the signal processor, shelter and transmitter, which date to the 1990s.