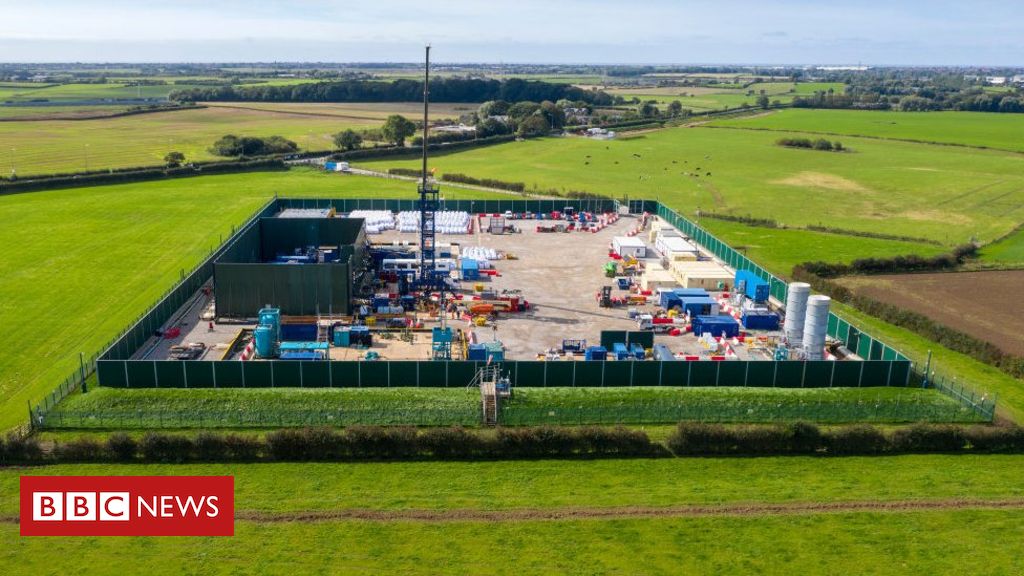 The government has called a halt to shale gas extraction – or fracking – in England amid fears about earthquakes.

It comes after a report by the Oil and Gas Authority said it was not possible to predict the probability or size of tremors caused by the practice.

Fracking has been suspended since a tremor in Lancashire in August.

Business Secretary Andrea Leadsom said shale gas had “huge potential” but the government was “no longer convinced” it could be extracted safely.

Fracking was suspended after activity by Cuadrilla Resources – the only company licensed to carry out the process – at its Preston New Road site in Lancashire caused a magnitude 2.9 earthquake.

Mrs Leadsom said: “After reviewing the OGA’s report into recent seismic activity at Preston New Road, it is clear that we cannot rule out future unacceptable impacts on the local community.

For this reason, she said, she had concluded the government should put a moratorium on fracking “with immediate effect”.

The government says it will “take a presumption against issuing any further Hydraulic Fracturing Consents” and this will continue unless compelling new evidence is provided.

However, it has stopped short of an outright ban.

Fracking is a process in which liquid is pumped deep underground at high pressure to fracture shale rock and release gas or oil trapped within it.

Assessment by the British Geological Survey in 2013 suggested there were enough resources in the Bowland Shale across northern England to potentially provide up to 50 years of current gas demand.

But research published in August estimated there were only 5-7 years’ supply.

The UK’s fracking industry, which has said the process could contribute significantly to future energy needs and create thousands of jobs, dismissed the report’s findings.

Fracking must be halted for 18 hours if it causes a tremor measuring 0.5 magnitude or above.

The government announcement is the second time it has placed a moratorium on fracking.

The first suspension, which lasted a year, was in November 2011 during the Conservative-Liberal Democrat coalition government.

Ms Leadsom said: “Shale gas offers huge potential in the UK, there’s no doubt about that”

“There’s also no doubt that in our determination to decarbonise, the continued use of gas will be very important for the next several decades so there’s no doubt that extracting more natural gas in the UK would be very attractive.

“But we’ve always been clear we can only do that if it can be done safely and on the advice from the Oil and Gas Authority we’re no longer convinced that is the case.”

The fracking industry has faced fierce opposition from both communities and environmental groups.

Prime Minister Boris Johnson has in the past supported fracking, writing in the Daily Telegraph that the discovery of shale gas in the UK was “glorious news for humanity”.

A recent report by the National Audit Office found the UK had spent at least £32.7m supporting fracking since 2011.

Labour has promised to stop the technique if elected in the general election on 12 December.

Labour’s shadow business secretary, Rebecca Long Bailey, said: “The next Labour government will ban fracking – whereas the Tories will only call a temporary halt to it.

“You can’t trust a word the prime minister says.”

Both the Liberal Democrats and Green Party also support a ban on fracking.

All fracking in Scotland has been suspended since 2013 and the SNP recently confirmed a policy of “no support” for the extraction method.

The Welsh Government has also opposed fracking for several years, with a “moratorium” in place since 2015, while there is a planning presumption against fracking in Northern Ireland.

The suspension in England will put pressure on Cuadrilla Resources which has so far invested £270m in the country’s shale gas industry.

Cuadrilla Resources has 30 full-time workers but also employs a number of contractors.

The government decision will be a blow to Cuadrilla which has been exploring for shale gas in Lancashire for almost a decade. The industry said fracking had the potential to help the country become self-sufficient in gas, creating thousands of jobs.

To limit the risk, a “traffic light system” was introduced that required fracking to stop following a tremor of 0.5 or more.

This happened several times. But when it triggered a quake of 2.9 in the summer, fracking was halted indefinitely.

Cuadrilla’s chief executive Francis Egan said last year if the 0.5 limit wasn’t lifted, the industry would be “strangled at birth”.

The question for the prime minister is, what happens now? Tens of millions have been spent looking for shale gas.

But opposition to fracking has doubled over the past six years while demand for renewable sources has grown.

Is this a genuine change in policy? Or will shale gas be back on the agenda in the future?

Ken Cronin, chief executive of UK Onshore Oil and Gas, which represents fracking companies, said: “Going forward, we are fully committed to working closely with the Oil and Gas Authority and other relevant regulators to demonstrate that we can operate safely and environmentally responsibly.”

But Rebecca Newsom, head of politics at Greenpeace UK said: “If the government reads the science and listens to the strong public opposition then fracking has no future.

“This lesson now needs to be applied to unlock onshore wind and solar, and significantly ramp up offshore wind.”