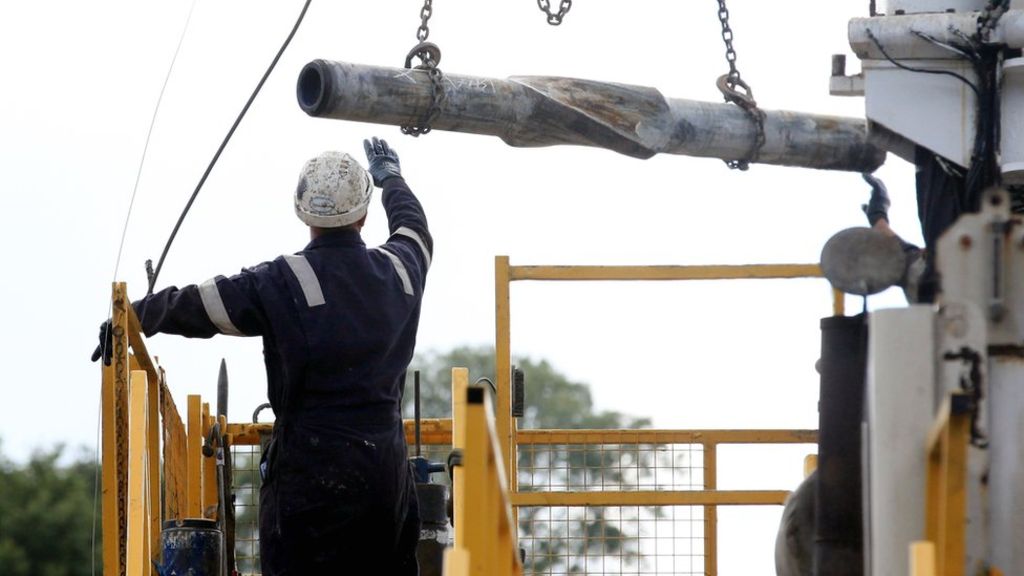 The gas reserves in shale rocks in the UK have been “hyped”, an academic said.

Professor John Underhill from Heriot-Watt University said the UK’s potential shale deposits were likely to have been disrupted by shifts in the earth 55 million years ago.

He said the government would be wise to formulate a Plan B to fracking for future gas supplies.

But the fracking firm Cuadrilla said it would determine how much gas was present from its test drilling.

Hydraulic fracturing, or fracking, is a technique designed to recover gas and oil from shale, a sedimentary rock found worldwide.

The amount of shale gas available in the UK is acknowledged to be a great unknown.

But Prof Underhill said his research on the influence of tectonic plates on the UK suggested that the shale formations have been lifted, warped and cooled by tectonic action.

“The complexity of the shale gas basins hasn’t been fully appreciated so the opportunity has been hyped,” he told the BBC.

This is very different from the US, where big deposits of shale gas were created in the continental heart of America, far from the movement of tectonic plates.

Prof Underhill’s comments are based on an unpublished paper on tectonics. He said he deduced the impact on shale formations by chance.

He said: “I’m neutral about fracking, so long as it doesn’t cause environmental damage. But the debate is between those who think fracking is dangerous and those who think it will help the economy – and no-one’s paying enough attention to the geology.

Prof Underhill said: “For fracking to work, the shale should be thick enough, sufficiently porous, and have the right mineralogy. The organic matter must have been buried to a sufficient depth and heated to the degree that it produces substantial amounts of gas or oil.”

Professor Underhill said the UK had been tilted strongly by tectonic movement caused by an upward surge of magma under Iceland.

This subsequently led the shale gas basins to buckle and lift, so areas that were once buried deep with high temperatures which generated oil and gas, were then lifted to levels where they were no longer likely to generate either.

The basins were also broken into compartments by folds which created pathways that have allowed some of the oil and gas to escape, he said.

A spokesman for the BGS said it could not comment formally on Prof Underhill’s comments as it had not done the research.

Cuadrilla’s technical director Mark Lappin told the BBC: “We have noted the BGS estimates for gas-in-place and consider that volume to be indicative of a very large potential reserve.

“It’s the purpose of our current drilling operations to better understand the reserve, reduce speculation from all sides and decide if and how to develop it.

“I expect Professor Underhill would be supportive of the effort to understand the resource including geological variation.”

The government’s opinion tracker showed public support for fracking has fallen to 16%, with opposition at 33%. But it also reported a lack of knowledge of the technology, with 48% of people neither supporting nor opposing it.

Professor Richard Davies, from Newcastle University, told BBC News: “It’s correct to say geology could yet surprise the companies who are investing. But the bottle neck, I think, is how many wells one can drill economically in a small space in the UK.

“Shale gas wells in the USA produce very small volumes of gas (2-6 billion cubic feet of gas each), and therefore thousands would be needed to impact on our reliance on imports.