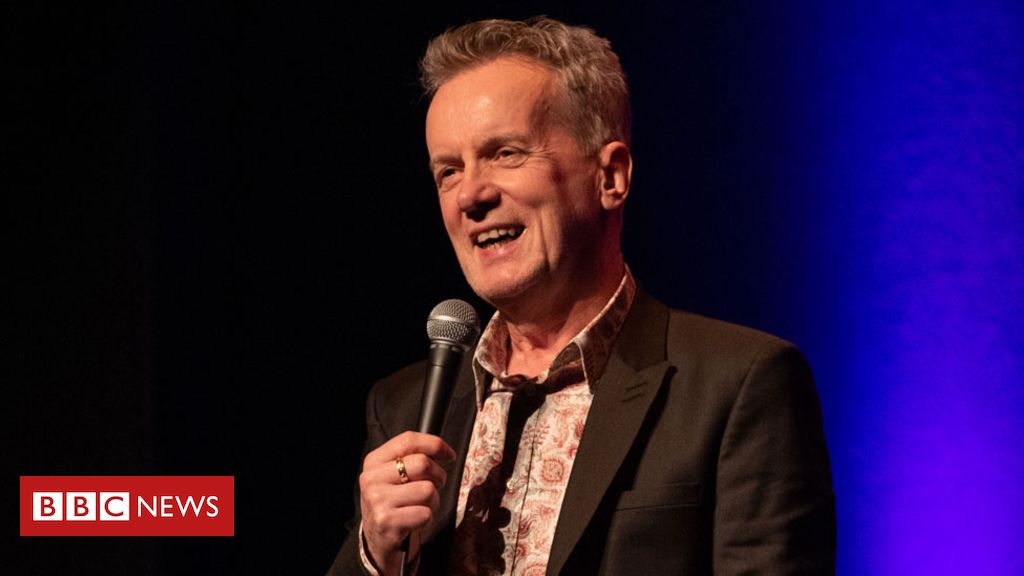 “The edge of inappropriate is the spiritual home of the best stand-up comedy,” proclaims Frank Skinner in the programme notes for his new West End show, Showbiz.

It’s also, he jokes, “the name of my country house in Gloucestershire”.

The 62-year-old, who has made a pretty good living walking the tightrope of comedic taste, is about to ride the bus (using his over 60s travel card) to London’s Garrick Theatre, as he speaks to the BBC, for the first night of a five-week residency, having road-tested it around the UK last year.

Loosely-based around celebrity anecdotes he’s acquired over the past 25 years working as one of the country’s most cherished comedians, Skinner’s show is littered with poetic and funny filth about his decaying body, lessening libido and late arrival to fatherhood in his mid-50s.

In an era when critics have called “wokeness” – the modern day political correctness – the death knell for comedy, the veteran stand-up still trusts his instincts.

“Sometimes when you start improvising on stage, which I do a fair bit of, obviously you haven’t planned it. But to be honest, it’s not like I’m one of these blokes who is sitting at home pouring it all out and then does a different thing on stage.

“I think the line between me on and off is fairly blurred”.

In other words, if a joke is good enough to tell down the pub, then it’s fit for the stage too.

The Royal family, Bruce Forsyth and the ahem, “cursed” Strictly dancers all find themselves on the receiving end of Skinner’s dry wit in the show, which The Guardian said finds the “statesman of stand-up shows” showing “no sign of stiffening”.

“It’s rare to see such fast-thinking wit deployed with such a sense of joy,” added The Times’ Dominic Maxwell.

Skinner declared on-stage during Wednesday’s press night that “a lightness of touch” is required when tackling certain topics (mostly genitalia). He allayed the fears of an apparently worried-looking audience member named Linda that she needn’t worry about an accent he was about to attempt.

“When I started doing comedy,” he adds, “We were very much what was then called ‘alternative comedy’ and the two great centrepieces of that was non-sexist, non-racist.

“That was that was the big thing, which now seems absolutely basic, page one, but then was revolutionary.

“I did mainstream working men’s clubs in Birmingham, and you would not believe the racism, for example, was absolutely the norm [for] friendly middle-aged entertainers.

“We were at the beginning of that and I think we started to expand it. So then you think, ‘Well what about homophobia?'”

While he jokes woke culture means he’ll no longer help attractive young women with their heavy suitcases, Skinner believes the new normal parameters are “a sort of a militaristic approach to kindness”.

“Unless you force people to do stuff, most people won’t do it. So I think you can make a few interesting dramas about sexual predators, but the best way to stop it is to say to people, they’ll lose their job.

US President Barack Obama recently spoke of his distrust of righteous online trolls, while US comedian Dave Chappelle made a whole stand-up special about cancel culture. Satirist Armando Iannucci said last week he thinks people are “losing the appetite to engage in argument” for fear of causing offence.

“I think it can be annoying at times,” Skinner goes on, “It can empower idiots on occasion, and when it becomes like a parlour game where people sit around saying, ‘Oh, you said that, and you shouldn’t have said that…

“I grew up going to football matches where people threw bananas at black players and we didn’t have to sit around and debate whether it was racist or not. But I think it’s one of the major social advances of the last 60 years.”

He believes that in the age of Twitter, it would be hard for any comedian harbouring suspect personal views to fake it for long anyway.

“I got in one night and my partner said to me, ‘What were you doing in Superdrug?’ And I thought, ‘This is it now, this is East Germany!’

“All my philandering in the past would be impossible in the modern generation”.

Fellow British comedian Ricky Gervais criticised celebrities at the Golden Globe Awards for mere virtue signalling and Skinner would tend to agree, noting “there’s only one thing more embarrassing than the celebrities talking about politics; and that’s politicians talking about anything other than politics”.

The working class millionaire confesses to have started preaching from the pulpit himself lately, to an audience of one: Seven-year-old son Buzz.

“The other day I gave a little speech at home about the fact that we shouldn’t see Frozen 2 as girl film, that there’s no such thing as a girl film.

“I don’t know whether I really believe that or not, but I felt it was important to say so!”

Dad and lad recently went on a history-themed trip to Rome, where the Catholic comedian managed to wangle front row tickets for an audience with the Pope at The Vatican. This time through his church connections, not his showbiz ones.

Another family trip saw Skinner make a deal with his partner of 19 years, Cath Mason, not to swear for the first five minutes of his set at Latitude Festival so the youngster could see his old man at work.

The star, who suffered a bad bout of pneumonia in late 2018 (“it’s great for the cheekbones!”), says he’s giving the late dad thing his “best shot”, mindful of how many younger men have made mess of it.

“If I’d have had kids in my 20s it would have been nightmarish”.

Skinner was in his 30s when he decided to give stand-up a shot, while working as an English lecturer, and he soon found himself winning the coveted Perrier Award at Edinburg Fringe Festival in 1991.

In the 1990s he became a household name, flying the flag for the (slightly) more intellectual end of lad culture alongside David Baddiel on the cult TV show Fantasy Football League, en route to getting his own chat show.

The teetotaller admits he used to live it up when he first got famous but says the effects soon wore off, and as a result he now has few actual showbiz friends as a result.

For this he blames his “lack of Class A drugs credentials” during an era of mass hedonism in British pop culture.

Although he didn’t fully large it up like the Gallagher brothers he did have similar chart success thanks to the England Euro 96 football anthem Three Lions, which he wrote with Baddiel and Lightning seed Ian Broudie (both of whom stepped out to see their old pal perform this week).

As his beloved England made it to the 2018 World Cup Semi-Finals, the song broke a chart record by returning to the top for a fourth time. Sadly though it broke another one soon after, by becoming fastest-falling number one of all-time, dropping to number 97 after Gareth Southgate’s men were knocked-out by Croatia.

Through bleary eyes, Skinner – who thinks England’s Euro 2020 forwards look “deadly” – was at least equipped to see the funny side.

“It’s beautiful that it was by 96 places. Couldn’t be better.”