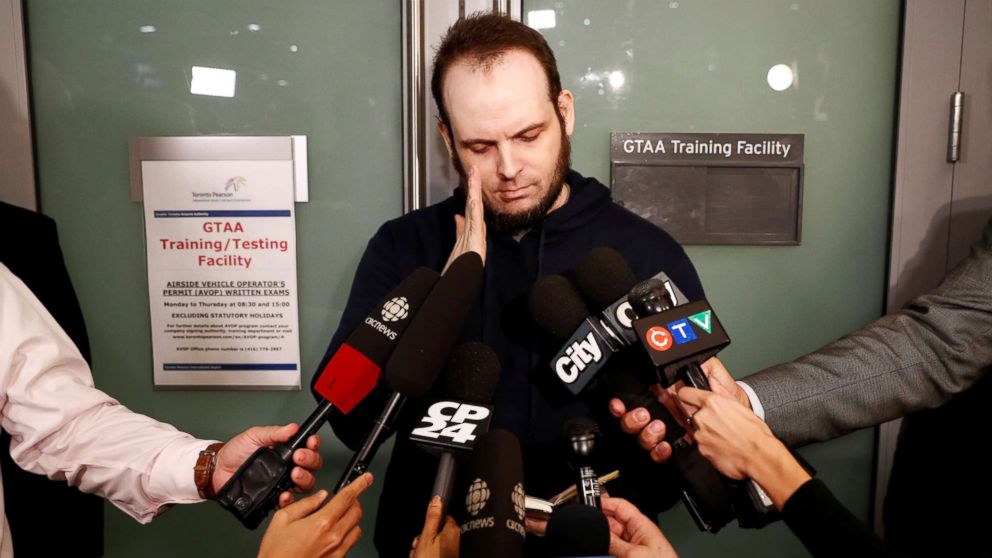 After being held hostage for five years by a Taliban-affiliated terrorist network in the mountains of Afghanistan, a Canadian man, his American wife and their three children born in captivity arrived in Toronto Friday night.

Joshua Boyle — who arrived at Toronto’s Pearson International Airport with his wife Caitlan Coleman and their children — told reporters inside the Air Canada terminal that the Haqqani network killed a fourth child born in captivity, an infant daughter, and raped his wife.

He added, revealing the rape of his wife, “As retaliation of the repeated refusal to accept an offer that the criminal miscreants of the Haqqani had made to me. And the stupidity and evil of the subsequent rape of my wife, not as the lone action of one guard, but assisted by the captain of the guards and the commandant.”

Speaking about the couple’s children, Boyle said, “Obviously it would be of incredible importance to my family that we are able to build a secure sanctuary for our 3 surviving children to call a home, to focus on edification,” Boyle told reporters. “And to try to regain of the childhood that they had lost.”

The Government of Canada issued the following statement on the arrival of Joshua Boyle, his wife Caitlan Coleman and their children at Toronto’s Pearson International Airport: “Today, we join the Boyle family in rejoicing over the long-awaited return to Canada of their loved ones. Canada has been actively engaged on Mr. Boyle’s case at all levels, and we will continue to support him and his family now that they have returned.”

The couple and their children were rescued in a dramatic operation orchestrated by the U.S. and Pakistani governments, officials said Thursday.

The couple were abducted in October 2012 while in Afghanistan as part of a brief backpacking trip and held by the Haqqani network, which has ties to the Taliban and is considered a terrorist organization by the U.S. government. Coleman was pregnant at the time.

The operation came after years of U.S. pressure on Pakistan for assistance. It unfolded quickly and included what some described as a shootout and a dangerous raid. U.S. officials did not confirm the details.

The family arrived in Toronto after flying from Islamabad, Pakistan, with a stopover in London. The family was seated in business class next to U.S. State Department officials.

An Associated Press reporter on the flight was given a handwritten statement by Boyle which read, “God has given me and my family unparalleled resilience and determination, and to allow that to stagnate, to pursue personal pleasure or comfort while there is still deliberate and organized injustice in the world would be a betrayal of all I believe, and tantamount to sacrilege.”

Boyle also expressed his displeasure with U.S. foreign policy by gesturing to one of the U.S. State Department officials and saying, “Their interests are not my interests.”

Boyle said one of his children is suffering from health issues and needed to be force-fed by rescuers.