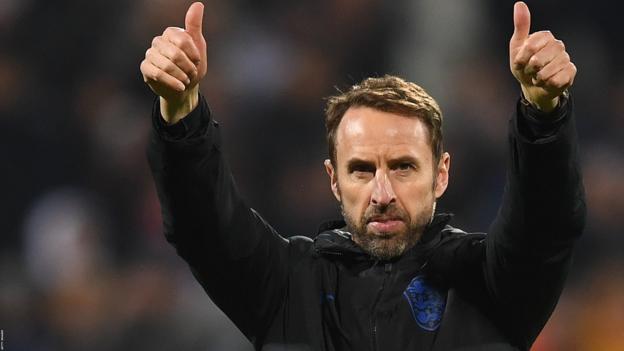 Gareth Southgate says his England side are “further ahead” than they were at the corresponding stage of qualifying for the 2018 World Cup.

Southgate’s side finished fourth at the finals in Russia and go to Euro 2020 next summer as one of the top seeds.

“I think the team have belief, for sure, you can see the confidence,” Southgate said.

“They have got the confidence to control games with possession, and they know they’re going to score goals.”

England’s 4-0 win over Kosovo on Sunday rounded off another impressive qualifying campaign for Southgate’s squad, who topped Group A after winning seven of their eight fixtures.

While they also finished top of their 2018 World Cup qualification group, England have progressed as an attacking force, more than doubling their goal tally – scoring 37 in eight games, compared to 18 in 10 games.

“They don’t come into these matches worrying about what might go wrong,” Southgate added.

“We’re definitely further ahead than we were heading into Russia, but we made massive strides in this period when we went into Russia.

“We’ve got to make sure that, to get the level of performance next summer, we’re going to have to improve in the way that we did over that spell as well.”

If reservations exist, they are based upon how England will fare once they meet opposition of a higher calibre.

England lost to the Netherlands in the semi-finals of the Nations League in June, and in Russia, despite reaching the semi-finals of a major tournament for the first time since 1996, they were beaten by Croatia and twice by Belgium.

And the Czech Republic, at 43rd in the world the highest-ranked side England faced in Euro 2020 qualifying, inflicted their only Group A defeat in October.

“What we don’t know, because we haven’t had those tests more recently against the top eight or 10, is exactly how we’re going to cope in those moments,” Southgate added.

“To win the European Championship is, at the moment, no easier than the World Cup. The final four [at the World Cup in Russia] were all European, and you’ve got to add Spain, Germany, Portugal and all the others into that, so it’s a really high-level tournament.”