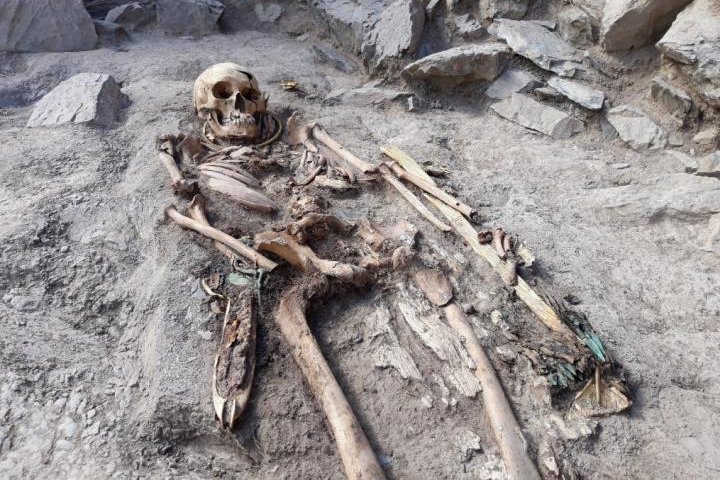 March 26 (UPI) — The Scythians of Eurasia have long been regarded as highly mobile, horse-riding warriors. Their cultural influence on the empires with which they both clashed and traded served as testament to the broad geopolitical range of the Scythians.

Despite the prolificacy of the Scythians in the historical records of the Greek, Roman, Persian and Chinese empires, however, the origins, organization and evolution of the Scythians has remained unclear.

According to a new survey of ancient Scythian genomes, the decline of more sedentary Bronze Age groups and the rise of Scythian cultures during the Iron Age followed an uptick in genetic turnover across Eurasia.

Researchers sequenced 111 ancient genomes from both Scythian and non-Scythian archaeological sites across the Central Asian steppe.

Analysis of the genomes helped researchers determine the relationships between different groups and how they changed over time.

The data, detailed Friday in the journal Science Advances, suggests that the region was populated by fairly homogenous groups of herders during the late Bronze Age.

After the first millennium BC, however, the genomic data suggests groups from east, west and south began moving into the region, yielding more diverse gene pools.

Archeologists have previously claimed both an eastern and western origin for Scythian culture. The latest research suggests an eastern origin more closely matches the genomic data.

However, the authors of the newly published survey suggests no single origin story can account for the rise of the Scythian confederation.

One of the major genetic sources for what came to be known as the Scythian people originated in the east, among the Altai Mountains, spreading south and west over the course of the Iron Age, mixing with local populations as they went.

Researchers found another group in the west, originating among the Ural Mountains, spread east into the Pontic-Caspian steppe at the same time the Altai peoples moved west.

Unlike the people of the Altai, the groups from the Ural Mountains — derivatives of early Sauromatian-Sarmatian cultures — remained more genetically stable, suggesting less admixing.

After the first millennium AD, the genomic data revealed new sources of genetic turnover and admixture events — changes that correspond with the decline and disappearance of Scythian cultures in the region.

Researchers suspect Scythian cultures were pushed out by eastern tribes, people of the Xiongnu and Xianbei confederations. The expansion of Persian-related empires from the south led to further genetic turnover across Central Asian steppe.

While the latest findings highlight the dynamism of early human history across the Eurasian Steppe, another investigation of Scythian culture — published earlier this month in the journal PLOS One — suggests they were less nomadic in practice than has been implied by archaeological and genomic analysis.

Researchers at the University of Michigan, collaborating with archaeologists in Germany, analyzed the isotopic composition of Scythian remains to determine their travel histories.

Their findings showed that the people of the Central Asian steppe were only slightly more mobile than their predecessors.

Though a small percentage of people moved extensively across the region — warriors and traders, perhaps — most people congregated around urban centers and lived and ate where they grew their crops and raised their livestock.

“The Scythian epoch was clearly a period of contradictions, with strong evidence for complex interactions between agro-pastoralists and pastoralists that contributed to population aggregation in urban locales,” Ventresca Miller, lead author of the PLOS One paper, said in a press release.

“This study highlights the potential use of using isotopic analysis to directly assess prevailing models of economies and mobilities during the Scythian era,” said Miller, an assistant professor of anthropology at Michigan.

Both studies of Scythian culture suggest the region was much more complex than popular histories have implied.

In the future, scientists said they hope genomic, isotopic and archaeological analyses can be combined to illuminate the ways people from different urban settlements interacted, as well as the ways Scythian people moved between urban and rural environs.

“In this way, we can move further away from assumed stereotypes of migration and nomadism toward dynamic and complex insights into globalized Scythian societies,” Miller said.