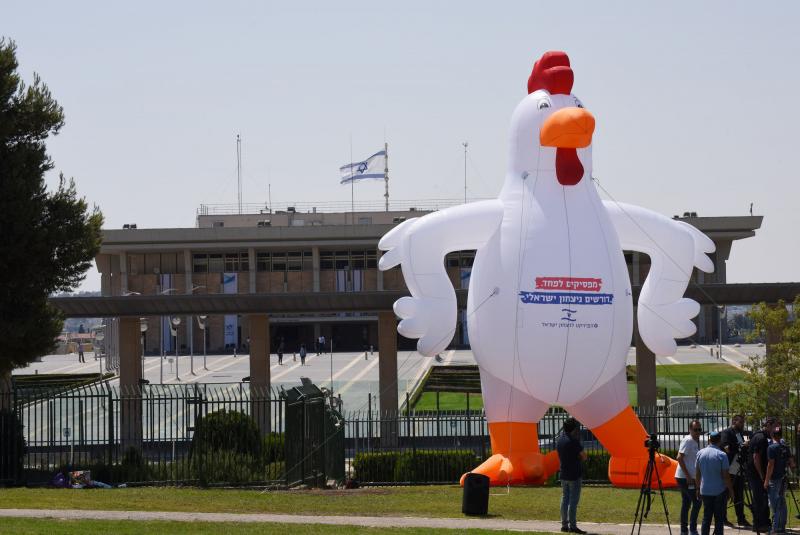 Aug. 14 (UPI) — Frustrated by the Israeli government’s response to the Hamas militant group, advocates set up a large, inflatable chicken outside the parliament building in Jerusalem Wednesday — with a message that read, “putting an end to fear, demanding an Israeli victory.”

The Israel Victory Project said the 32-foot tall chicken protests “cowardice” Israeli governments have shown throughout history when facing “Hamas and Palestinian resistance.” The bird, the group says, stands defiantly with its wings by its hips ready for a fight.

The chicken’s appearance coincided with Central Elections Committee debate Wednesday at the Knesset.

“Hamas is a terrorist organization of 30,000 thugs who hold 2 million Gazans hostage, and is running rings round Israel,” Professor Simcha Goldin, whose son was an Israeli solider killed by Hamas, said. “Israeli’s citizens are not afraid, you are afraid. We demand policies.”

Goldin’s was killed in 2014 during Operation Protective Edge and his body has been held captive by Hamas since. Goldin has demanded the remains’ release — without a trade for a Hamas militant.

“We need to change the equation in which Hamas kidnaps soldiers and uses them as an asset,” he added. “The enemy has won. You can leave soldiers on the battlefield.”

The mother of another slain soldier being held by Hamas rallied outside Israeli Prime Minister Benjamin Netanyahu‘s residence.

“The prime minister is not interested in returning my son,” she said. “You’ve had many opportunities … but you’ve done nothing.

“You know how to make a thousand promises, but not keep any of them.”

Liran Baruch, chair of the IDF Disabled Veterans’ Forum, called for the Israeli government to deport families of convicted terrorists, destroy their homes and put them to death.