New Year’s Eve celebrations were muted by coronavirus restrictions in London and New York, while countries including Australia and New Zealand welcomed in 2021 with impressive firework displays.

Big Ben ushered in 2021 with its chimes in an eerily subdued London, which would typically be packed with swathes of people waiting to watch a dazzling display of fireworks.

Bars and pubs that in past years would be filled with people singing Auld Lang Syne sat empty and silent across the whole country. 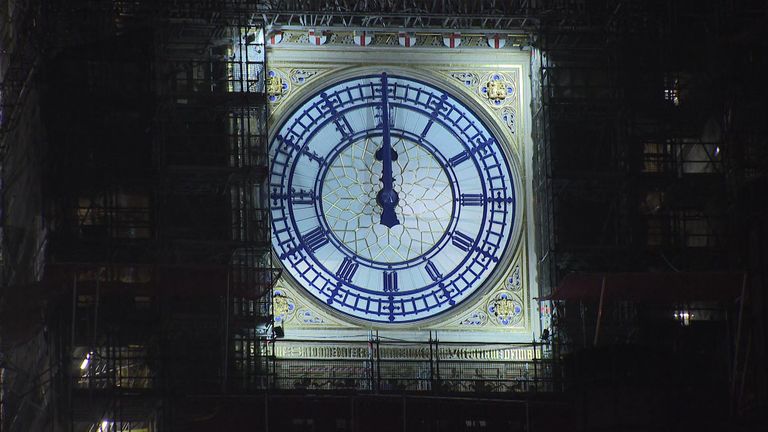 UK welcomes in the New Year

In Edinburgh, where Hogmanay is one of the most anticipated festivals of the year, only small groups of people were seen in streets that would typically be thronging with revellers.

There was also a crackdown on mass gatherings in New York, with police officers deployed in Times Square to turn away party-goers over concerns of the spread of COVID-19.

The ball dropped like always in Times Square, but police fenced off the site synonymous with New Year’s Eve to prevent crowds of any size from gathering.

Meanwhile, other parts of the world celebrated in their near-usual style.

Australia was among the first nations to ring in 2021 with a made-for-TV-fireworks display which didn’t disappoint compared to previous years.

Shortened to seven minutes, the display took place over Harbour Bridge, which was only watched live by those who live in the area and their guests.

The celebrated annual event normally attracts one million people, but this year Australian officials banned people from gathering near the bridge to watch due to coronavirus restrictions.

In Auckland, New Zealand, residents were treated to a five-minute fireworks and light show when the clock struck midnight.

Crowds were allowed to gather in the city to mark the occasion due to the nation’s low number of new coronavirus cases.

North Korea began 2021 with crowds in the capital Pyongyang’s main square, with a concert and fireworks show held amid COVID-19 restrictions.

In South Korea, Seoul’s city government cancelled its annual New Year’s Eve bell-ringing ceremony in the Jongno neighborhood for the first time since the event was first held in 1953, months after the end of the Korean War.

Taiwan, which has been a success story of the pandemic, hosted its usual fireworks display by its capital city’s iconic tower, Taipei 101.

For its annual flag-raising ceremony in front of the Presidential Office Building on New Year’s morning, attendance was limited to government officials and invited guests.

Thailand ushered in the New Year with a fireworks display at the Iconsiam mall in Bangkok.

The country imposed a ban on Wednesday on large gatherings and events across the country in an effort to contain its worst coronavirus epidemic yet.

Officials in Hong Kong cancelled the pyrotechnics over Victoria Harbour, as well as the annual iconic Lunar New Year parade in February.

Beijing held a countdown ceremony with just a few invited guests, while other planned events were called off.

In Wuhan, where the pandemic is thought to have originated, thousands gathered at several popular landmarks across the city centre for the countdown to 2021.

Some said they were being cautious, but weren’t particularly worried.

Japan rang in the New Year without its annual event at which Emperor Naruhito and other imperial family members greet members of the public.

In Tokyo, not only were all-night trains cancelled on New Year’s Eve, but several of the city’s big countdown parties, concerts and other seasonal gatherings were called off as well, including the famous Shibuya Scramble Crossing party.

In Ireland, the bells of Christ Church Cathedral in Dublin did not ring in the New Year for the first time in living memory and possibly in centuries.

With the entire country under the toughest COVID-19 restrictions, all New Year’s Eve events were moved online.

South African citizens were also urged to cancel parties, with many instead lighting candles as a way to honour health workers and people who have died in the COVID-19 pandemic.

In many European countries, authorities warned they were preparing to clamp down on revellers breaching coronavirus measures, including nightly curfews in France, Italy, Turkey, Latvia, the Czech Republic, and Greece.

As the clock struck midnight, fireworks erupted over Moscow’s Red Square and the Acropolis in Athens, but the explosions echoed across largely empty streets as people obeyed orders to stay home.

“No one will be on the streets after 10pm (Athens) will be a dead city to make sure no more restrictions are imposed,” said Greece’s public order minister, Michalis Chrisohoidis.

France mobilised 100,000 police and gendarmes to break up New Year’s Eve parties and enforce a curfew from 8pm to 6am.

Half of the metro lines in Paris were also closed in the evening to discourage gatherings.

In Germany, the sale and use of fireworks in public places was banned in the run up to 31 December to discourage large crowds.

In Brazil, home to the world’s second-deadliest outbreak after the United States, beaches and bars normally packed with NYE revellers were much quieter than usual.

Rio officials decided to seal off Copacabana beach, where millions of people dressed in white usually gather to marvel at fireworks and attend large concerts, to everyone but residents.