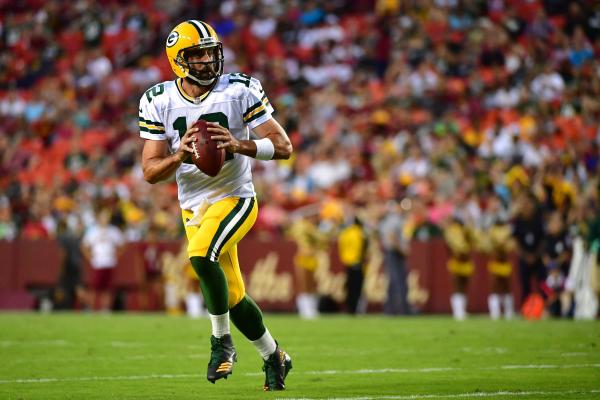 Green Bay failed to reach the postseason for the first time since 2008. The Packers’ 7-9 record was the second worst of Mike McCarthy‘s 12 seasons as head coach.

And after reaching the NFC Championship Game in both 2014 and 2016, the Packers were eliminated from the playoffs by mid-December.

Green Bay could be poised for a bounce-back season, though.

The Packers return nine starters on each side of the ball and addressed several positions of weakness in free agency. Most important, though, quarterback Aaron Rodgers returns after missing nearly 10 full games last season with a broken collarbone.

At the end of the Packers’ offseason program, McCarthy called it “one of our best offseasons, just as far as the amount of work we were able to get done, the quality of work.”

The key, as it is every year, is the health of Rodgers.

In two of the past five years, Rodgers suffered a broken collarbone and missed at least half of the season. Green Bay fell apart both years, going 5-12-1 in the games Rodgers missed, a .306 winning percentage.

Green Bay reached the postseason in 2013 but lost in the wild-card round.

Rodgers, 34, remains arguably the most gifted quarterback in the game. But as recent seasons have proved, the Packers move from one of the NFL’s elite teams to one of its poorest outfits without their two-time MVP.

Rodgers won NFL MVP honors in 2011 and 2014, and he was the MVP of Super Bowl XLV. When he’s on the field, the Packers almost always have a chance.

The No. 1 question in Green Bay, though, is whether Rodgers can give the Packers 16 games. Rodgers’ track record in that department has been spotty, at best, and he’s now entering the twilight of his career.

Rodgers suffered a torn ACL in high school, missed the final five games of the 2006 season with a broken foot and missed the last four regular-season games in 2007 after suffering a hamstring injury.

Rodgers suffered two concussions in 2010, broke his non-throwing collarbone (left) in 2013 and missed nearly eight full games, and then battled through a pair of calf injuries in 2014. Rodgers also had arthroscopic knee surgery in January 2016, and he missed almost 10 full games in 2017 after breaking his right (throwing) collarbone.

Between now and the Packers’ season opener on Sept. 9, thousands and thousands of words will be written about the various players in Green Bay’s training camp. The truth, though, is that if Rodgers goes down again, Green Bay’s year is likely over.

Backups Brett Hundley and DeShone Kizer — who will battle for the No. 2 job — both have plenty to prove.

“Obviously, I wasn’t there last year, so it was disappointing,” Rodgers told reporters this spring. “But there’s things you can control and things you can’t control. We’ll try to control the things to get myself ready to go and ready to play 16 games.”

If Rodgers stays healthy, anything and everything seems possible in Green Bay. If he doesn’t, the year figures to be a bust once again.