BENGALURU: If you walk into the head office of Canara Bank in Bengaluru, the first thing you are likely to encounter is a 4.5-feet tall Kannada-speaking robot called Mitra. The robot, with a HD camera in its head and the Canara Bank logo on its chest, answers close to 500 frequently asked questions ranging from ‘lift elidhe?’ (Where is the lift?) to ‘student loan yeshtu aguthe?’

(How much is the student loan?) while zipping around at 15 km/hr.

“The robot can listen to customer queries and offers guidance depending upon the question,” said KN Ramamoorthy, GM of Canara Bank. The guidance is welcome since the Canara Bank head office has 15 departments and customers are usually clueless about which counter to approach when they walk in for the first time.

“Mitra goes around the office answering customer queries and guides them to the correct counter,” said Balaji Vishwanath, chief executive of Invento, the 10-month-old startup that created the robot. 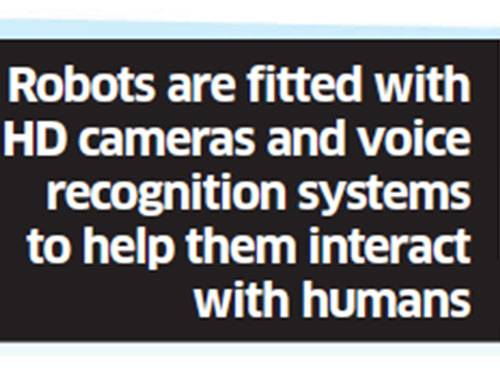 Canara Bank isn’t the only one experimenting with robots as customer assistants. A growing number of public and private sector players such as HDFC Bank and City Union Bank are introducing humanoid robots to provide basic information such as a bank’s history, account details, lending rates, updating passbooks, etc. The robots typically cost Rs 3-5 lakh.

Take the case of City Union Bank, which launched the country’s first banking robot ‘Lakshmi’ in Chennai in November 2016. The two-feet tall Lakshmi offers details about accounts, interest rates, loans, etc. Lakshmi is programmed to interact in English and carries out an average of 30-40 customer interactions a day. “We have a beta version of the Lakshmi robot in Tamil, which will be deployed by end of July. It can answer about 150 questions,” said N Kamakodi, MD of City Union Bank.

HDFC Bank launched its banking robot IRA in late 2016 in Mumbai, which like its counterparts, greets customers and takes them through the various services on offer.

“Going forward, we are planning to step up the robot’s capability to carry out tasks like financial transactions and ordering cheque books,” said an HDFC spokesperson, adding that the robot manages 60 customer interactions a day. HDFC Bank plans to introduce over 20 such robots in two years.

Canara Bank, which plans to kick off a ‘digital branch’ in the next 20 days in Bengaluru, plans to introduce Mitra robots in all metros by the end of the current fiscal.

But are customers willing to engage with robots in banks? Bankers are positive. “During the first 10 years of their implementation, even ATMs were perceived as a gimmick. It took a complete decade for users to embrace ATMs. It is the same case now,” said Kamakodi. “The exponential rise in robot banking services will come by as the learning curve for AI-enabled banking improves,” he added.

Startups making these robots are seeing rising demand. “We are working on the second version of IRA robot and we are integrating IBM Watson (IBM’s cognitive computing system) on top of it and training with their data,” said Jayakrishnan T, chief executive of Asimov Robotics, which created IRA for HDFC Bank. “In the next three months, we are planning to produce 25 units,” he added. Invento said it is in talks with two more banks to make robotic customer assistants.

Sometimes, though, customer expectations from robots can be a tad high. “We get 3-4 inquiries every day about robots for different applications with varied expectations… People sometimes expect the product to be as proficient as Chitti Rajinikanth (a character from the Rajini movie Enthiran) or I, Robot (a Will Smith-starrer),” says Jayakrishnan.

While most robots today largely serve as information kiosks and basic customer assistants, they are likely to be integrated with core banking systems, said industry executives. “These are early days in the adoption of robotics in banking; we have to work on the security aspect,” said Vishwanath, adding, “Only if that is done can we request banks to provide access to critical banking data to perform core banking services like insurance, financial transactions, etc.”

There are also some added perks of deploying robots. Mitra, for instance, can provide basic surveillance. “A banking assistant by the day, Mitra can be a surveillance machine at night — a CCTVfitted night watchman,” says Vishwanath. But for now, the chowkidar’s job is safe.