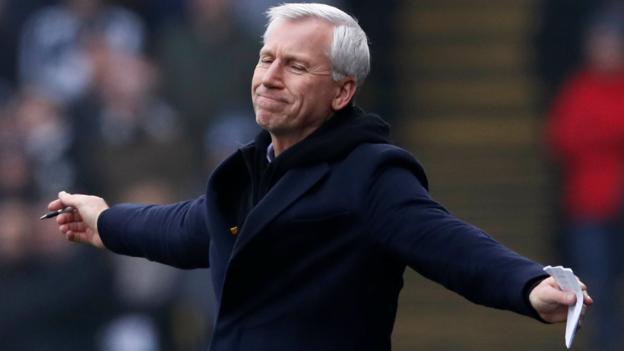 Alan Pardew will struggle to get back into management after his departure from West Brom, says former England striker Ian Wright.

“Which chairman’s going to give him a job to keep them in the Premier League?” said Wright on BBC 5 live.

“Even if he went into the Championship, which chairman is going to say I want Alan to come in and keep us in here?”

Pardew, 56, was appointed on 29 November after the Baggies sacked Tony Pulis following a run of 10 Premier League games without a victory.

Now bottom of the table, a 2-1 home defeat by Burnley on Saturday left them 10 points from safety with six games remaining.

His achievements include taking West Ham and Crystal Palace to FA Cup finals in 2006 and 2016 respectively.

Speaking about Pardew’s departure from West Brom after just four months in charge, Wright questioned the respect the players had towards their former manager.

“It looks to me that at no stage did they accept him as a manager and respect him enough to play in a way that would get them out of trouble,” he told 5 live’s Monday Night Club.

Speaking on the same programme, former Chelsea striker Chris Sutton said Pardew had been let down by some of his senior players.

Pardew’s exit comes six weeks after four of his players were accused of stealing a taxi during a training camp in Barcelona.

“There’s an argument that some players should be sacked as well,” said Sutton. “He’s gone in there with a bunch of pirates and they look like they have plotted to get him to walk the plank.

“The senior players have been a disgrace.”

Sutton also questioned whether Pardew would want to manage again after his experience at The Hawthorns.

“He has been a successful manager in the past, that’s why he got the job,” he said.

“When you look at the way senior players have let him down, he might think ‘I’ve had enough, I don’t want to go back into this rat race’.”