NASA released the photos during a news briefing Friday afternoon following the rover’s successful arrival at Jezero Crater the day before. One image shows the rover hanging underneath the jetpack device that provides the final descent.

NASA’s team on the project said the images exceeded their expectations.

“I mean this is something that we’ve never seen before. It was stunning and the team was awestruck,” said Aaron Stehura, a NASA flight system engineer.

“You can see the dust kicked up by the rover’s engines, probably about two meters or so above the surface of Mars,” said Adam Steltzner, chief engineer for the mission.

Other images released Friday included the first color photo of the surface near the rover and a wheel of the rover. A fourth image showed the rover and its parachute as it descended, taken by the Mars Reconnaissance Orbiter — a NASA spacecraft that has been circling the planet since 2006.

Scientists began to pore over the images for clues about the geology of the region, said Pauline Hwang, mission operations system manager.

“We were just, kind of like on Cloud 9, and all of us were saying we were kind of in this weird dreamlike state,” Hwang said.

On Friday, the rover began to pop bolts that hold instruments down, and NASA prepared to extend masts, cameras and sensors.

“The rover ended up in a very flat surface, so we’re only at 1-degree tilt,” Hwang said. “So, that’s super flat for the rover, which is great.”

Photos of the rocks aren’t enough to determine their composition, said Katie Stack Morgan , a NASA research scientist, but NASA believes the area has a mix of volcanic and sedimentary rock. NASA has determined the crater was, at one time, an ancient lake bed with a river delta.

“Perseverance has the payload to help us figure this [rock types] out, so we can’t wait to use our instruments,” Stack Morgan said.

So far, NASA hasn’t discovered any problems with the rover, which was launched from Kennedy Space Center in Florida in July.

“We will, as we always do look over the images with a fine-tooth comb, and look for any anomalies that might teach us how to do our jobs better in the future, but we didn’t see any huge ones that stuck out yesterday,” Steltzner said.

Exploration of Mars through history 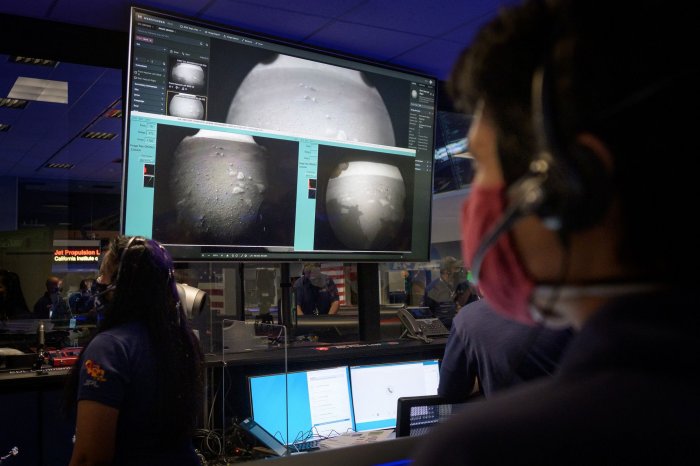 Members of NASA’s Perseverance Mars rover team watch in mission control at the Jet Propulsion Laboratory in Pasadena, Calif., as the first images arrive moments after the spacecraft successfully touched down on Mars, on February 18. Photo by Bill Ingalls/NASA | License Photo