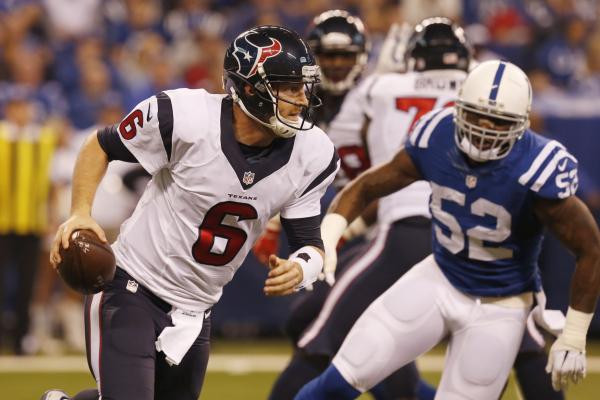 HOUSTON — For Houston Texans quarterback T.J. Yates, the starting job that eluded him for years is firmly within his grasp.

Yates will start his second consecutive game Monday against the Pittsburgh Steelers.

Texans head coach Bill O’Brien affirmed that Yates will remain the starter. He didn’t officially rule out quarterback Tom Savage for the remainder of the regular season, but emphasized that he’s a “ways off” in terms of being cleared under the NFL concussion protocol.

Yates is hoping to upgrade his performance and production significantly after the entire offense struggled during a 45-7 road loss last Sunday to the Jacksonville Jaguars.

In his first start in two years, Yates was sacked four times and hit nine times overall as he completed just 12 of 31 passes for 128 yards with one touchdown and one interception.

“Obviously, starting for the first time in two years, you have to get kind of back into the groove of things,” said Yates, who threw touchdown passes in relief of Savage the previous game against the San Francisco 49ers. “In the San Fran game, I could kind of just go out there and read and react and go play. But with a week of preparation, different team, different look, it’s just kind of going through the process of getting back out there on the field.

“Definitely starting fast. That’s a goal of the whole offense and the team, really. We have to get something going early to kind of get momentum built and just kind of build on that.”

Yates finished with a 48.9 passer rating against a defense headlined by two Pro-Bowl cornerbacks in A.J. Bouye and Jalen Ramsey and defensive lineman Calais Campbell.

“There were a few times where I thought he had a receiver open early on that he could’ve gotten the ball out of his hands that maybe he just wasn’t comfortable with the throw or didn’t feel good about it, but it was there,” Ryan said. “And I think after looking at the tape together, he’d be the first to tell you he saw a few things where the ball could’ve come out of his hands.”

For the season, Yates has completed 26 of 57 passes for 303 yards, three touchdowns and one interception for a 72.5 passer rating.

“He came in late in the year and he’s done a good job for us,” O’Brien said. “I know it’s been tough. I think the Jacksonville defense is a great defense, and to come in there for your first start, that’s not easy, and I know he’ll get better.”

It’s not a political campaign, and Bill O’Brien already holds the office as the Texans’ head coach.

With unconfirmed speculation surrounding O’Brien during an injury-plagued 4-10 season, he’s getting plenty of endorsements inside the Texans’ locker room.

One day after rookie quarterback Deshaun Watson reiterated that he only wants to play for O’Brien, Texans Pro Bowl wide receiver DeAndre Hopkins said he wants him back.

“Bill’s a great guy, great coach,” Hopkins said. “Everybody in this locker room loves him, so why not?”

O’Brien isn’t necessarily looking for that kind of statement, but it’s meaningful to him nonetheless.

“I appreciate all the support that anybody, I think that’s just the way I think any of us are,” O’Brien said. “People support you, it’s a nice thing. But, at the end of the day, we’ve got to focus on Pittsburgh and that’s what we’re trying to do.”

Hopkins has 61 catches for 866 yards and five touchdowns with 43 first downs on 107 sideline targets.

“He’s a dynamic player, combat-catch guy,” Steelers head coach Mike Tomlin said. “I think that’s probably the most defining thing or the most shocking thing about his game as we study him this week, is he’s always open because if he’s in one-on-one circumstances, he can make the combat-catch, and does consistently. And even sometimes in the two-on-one situations. He’s a big-time, big-time playmaker for them.”