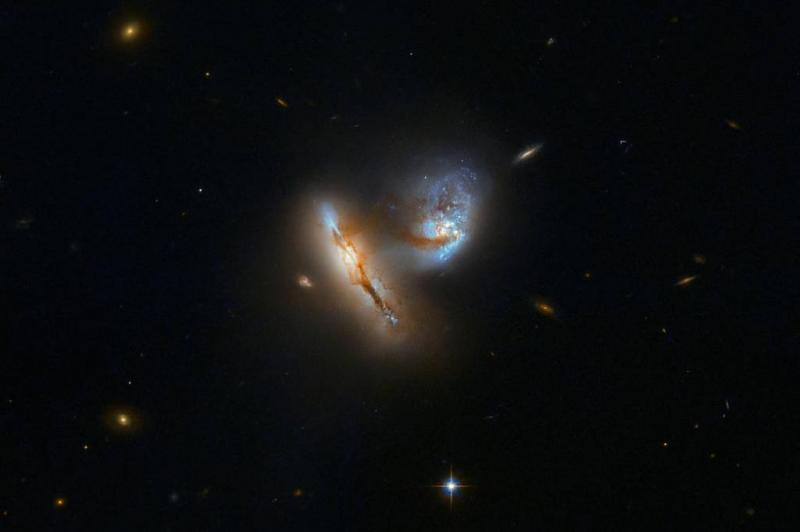 Aug. 9 (UPI) — NASA shared an image, recently captured by Hubble, of the galactic duo UGC 2369 on Friday. The image showcases the pair caught in a playful dance.

Long, long ago, the galaxies were separate, but today, they are in the midst of colliding. Slowly, their mutual gravitational attraction is pulling them closer and closer. As they’ve become entwined, gravity has distorted their features, altering their appearances.

“A tenuous bridge of gas, dust and stars can be seen connecting the two galaxies, created when they pulled material out into space across the diminishing divide between them,” NASA wrote in a news release.

Still, despite their contortions and shared name, the two galactic entities remain visibly distinct. Millions of years from now, however, the pair will be almost completely enjoined.

No galaxy can persist on its own for very long, relatively speaking — interactions are inevitable.

For large galaxies like the Milky Way, galactic interactions typically involved small neighbors. Over the last few billion years, the Milky Way has absorbed several of its neighbors.

For big galaxies, such interactions cause minimal structural disruption. Interactions with dwarf galaxies are relatively common.

“But every few billion years, a more momentous event can occur,” according to NASA. “For our home galaxy, the next big event will take place in about four billion years, when it will collide with its bigger neighbor, the Andromeda galaxy. Over time, the two galaxies will likely merge into one — already nicknamed Milkomeda.”