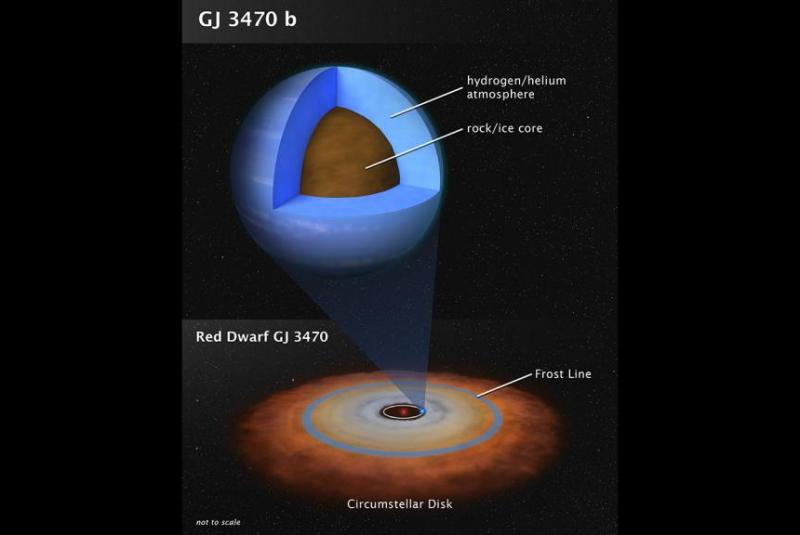 July 2 (UPI) — For the first time, scientists, with the help of a pair of NASA space telescopes, have identified the chemical signature of the atmosphere surrounding a mid-sized exoplanet.

In size, mass and composition, Gliese 3470 b is like a cross between Earth and Neptune — a rocky core surrounded by a thick layer of gas. The exoplanet weighs 12.6 Earth masses. Neptune by comparison, weighs 17 Earth masses.

Mid-sized planets like Gliese 3470 b are common in other planetary systems, but are absent in our own solar system. Despite their ubiquity, researchers have been unable to confirm the chemical composition of a mini-Neptune exoplanet.

By characterizing the makeup of Gliese 3470 b’s atmosphere, scientists may be able to determine how medium-sized planets form.

“This is a big discovery from the planet-formation perspective. The planet orbits very close to the star and is far less massive than Jupiter — 318 times Earth’s mass — but has managed to accrete the primordial hydrogen/helium atmosphere that is largely ‘unpolluted’ by heavier elements,” Björn Benneke, researcher at the University of Montreal in Canada, said in a news release. “We don’t have anything like this in the solar system, and that’s what makes it striking.”

Using NASA’s Hubble and Spitzer space telescopes, scientists successfully measured changes in the spectral signature of the host star’s light as the planet passed across. By observing which wavelengths were absorbed as the planet made its transits, scientists confirmed the dominance of hydrogen and helium in the exoplanet’s atmosphere.

“For the first time we have a spectroscopic signature of such a world,” said Benneke. “We expected an atmosphere strongly enriched in heavier elements like oxygen and carbon, which are forming abundant water vapor and methane gas, similar to what we see on Neptune. Instead, we found an atmosphere that is so poor in heavy elements that its composition resembles the hydrogen/helium-rich composition of the sun.”

Unlike large planets like hot Jupiters, which scientists estimate form far away and then migrate closer to their host stars, researchers suggest Gliese 3470 b was formed close to its red dwarf sun.

Benneke estimates the alien world started as a rocky core and slowly accreted gas from the protoplanetary disk to form its atmosphere.

“We’re seeing an object that was able to accrete hydrogen from the protoplanetary disk but didn’t run away to become a hot Jupiter,” said Benneke. “This is an intriguing regime.”

It’s possible the disk of gas and dust dispersed before the sub-Neptune could get any bigger.

“The planet got stuck being a sub-Neptune,” said Benneke.