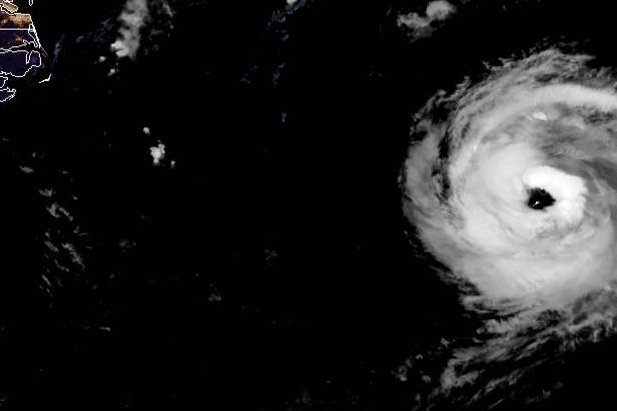 In a 5 a.m. AST advisory, the National Hurricane Center said the entire island of Bermuda was inside Paulette’s eye as it moved north-northwest at 12 mph with maximum sustained winds of 90 mph.

Although winds have subsided across Bermuda due to being directly under its eye, hurricane-force winds and torrential rains will return with the south portion of Paulette’s eye passing over the island, it said.

“On the forecast track, the eye of Paulette will continue to pass over Bermuda during the next couple of hours, followed by passage of the southern portion of the eyewall,” the NHC said.

Paulette strengthened into a hurricane Saturday night and the Bermuda government warned its residents to prepare for it to hit directly as a Category 2 storm.

“The public will need to prepare for a long duration of tropical-storm-force winds beginning late Sunday afternoon and then ramping up to hurricane strength by the early hours of Monday,” the government said in a statement.

Bermudans were warned that the storm should last nine hours, creating a storm surge greater than three feet. Residents in low-lying areas were warned to take the necessary safety precautions to protect themselves and their homes.

Schools and all government buildings will be closed Monday and Tuesday while the L. F. Wade International Airport was shuttered Sunday evening and was scheduled to reopen noon Tuesday.

The National Hurricane Center said in its early morning advisory that Paulette was to take a northward turn by late morning and continue in this direction over Monday before increasing in speed into the evening.