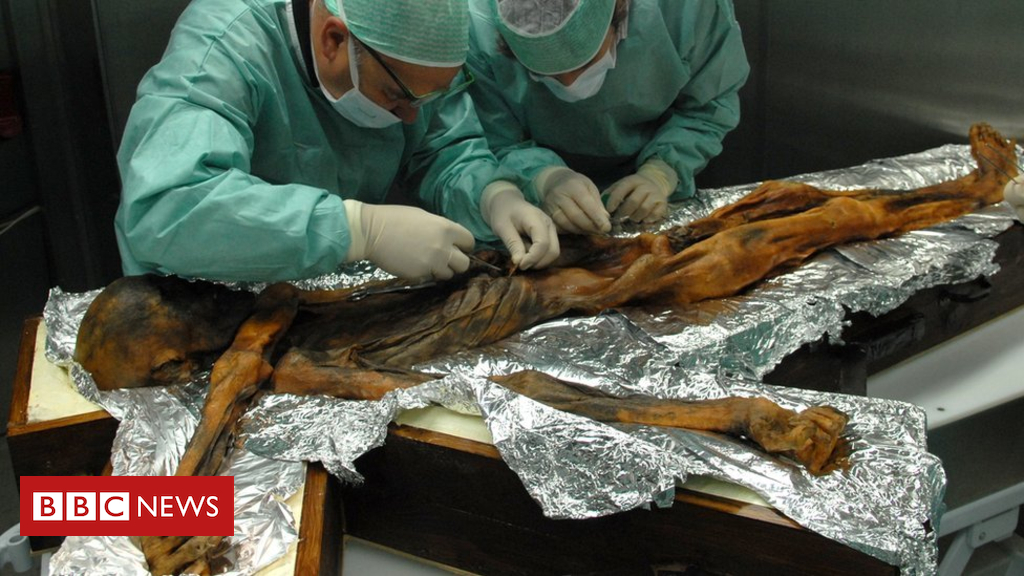 Goat’s fat and wild venison, plus sides of ancient wheat and bracken.

It’s not a menu likely to appear on Masterchef, but for some of our ancestors it was a nutritious feast.

Scientists have revealed that the last supper of Oetzi the Iceman was well-balanced but also alarmingly high in fat.

The man lived 5,300 years ago and met his death on a frozen glacier. His body was preserved in the ice for millennia until it was discovered in 1991.

Scientists have been able to find out about many aspects of his life, including what he ate before he died.

They say he filled his stomach with fat from wild goat, meat from red deer, an ancient grain known as einkorn and toxic fern.

The fat content was 50%, which is much higher than the 10% in the average modern diet.

“If you consider the altitude where the Iceman was hunting, you need this kind of energy supply,” said Dr Frank Maixner of the Eurac Research Institute for Mummy Studies in Bolzano, Italy.

“And the best way to do this is by eating fat; this gives you the necessary energy to survive in this harsh environment.”

What does this say about the diet of our ancestors?

The study, published in Current Biology, gives a rare glimpse into what was on the menu during the Copper Age.

The Iceman’s diet has been analysed before, but not in such detail. The latest investigation is based on looking at his stomach contents.

Surprisingly, this organ was discovered only recently as it was not in the normal place, due to the way his body was mummified over time.

The scientists were able to deduce that the fat came not from dairy products, but from the Alpine ibex, a species of wild goat that lives in the mountains of the European Alps.

“His diet was a well-balanced mix of carbohydrates, proteins and also fat,” said Dr Maixner. “Quite astonishing also was the high fat content he ingested.”

Nutritious, but how did it taste?

The meal would have sustained Oetzi on his snowy trek, but it may not have tasted too good.

“It’s goat fat and it’s hard to imagine how this tastes,” said Dr Maixner. “It’s definitely not as tasty as we would eat nowadays.

“Considering that there was no salt also, the pure taste of this meat, this fat – of all these components – I think it’s hardly edible.”

Although the Iceman did not have to contend with processed food, there was a negative side to his diet.

He already had signs of blocked arteries at the time of his death.

He may have died in battle, as he had several wounds to his body and was carrying weapons, including a copper axe.

He may also have been dosing himself with herbal medicine, as the researchers found traces of bracken, a type of fern, in his stomach.

Alternatively, he may have wrapped his food up in fern leaves and ingested the toxic spores by mistake.

The wild meat may have been eaten fresh or perhaps dried.