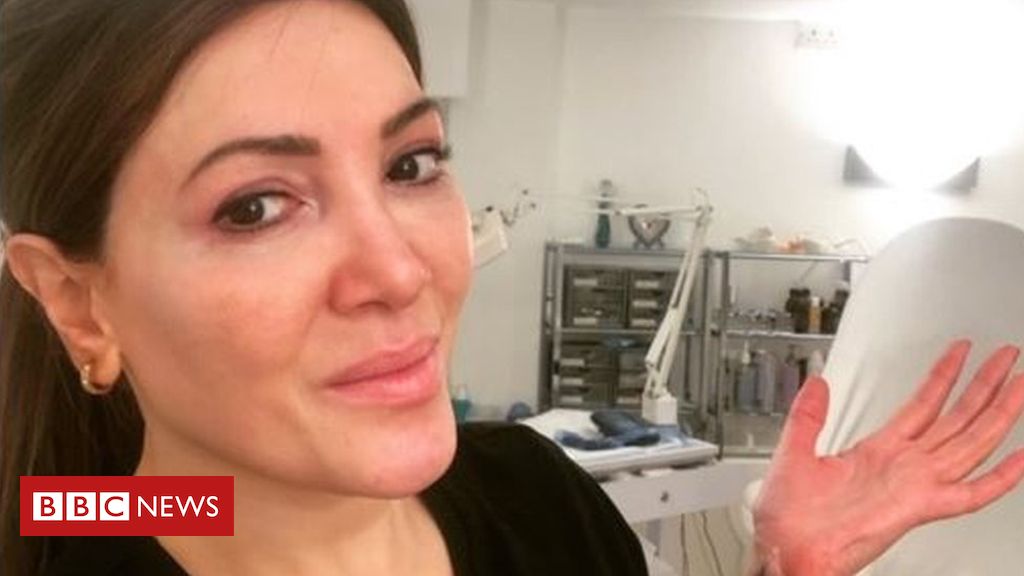 Businesses are still struggling to access government-backed loans from their banks.

Hina Solanki says she has had a nightmare trying to get support from her bank for her tattoo business to get through the lockdown.

“I can’t pay anything. I’m living on cards. It’s extremely stressful”, she says.

For the last fortnight she has been trying to apply for a £50,000 Bounce Back Loan from her bank.

“But I just get error messages,” she says. “They seem to have a technical fault.”

She’s not alone, even though it is nearly two weeks since the launch of the Bounce Back Loan Scheme (BBLS) to prop up stricken small businesses.

Hundreds of thousands of applications have been approved, but BBC News has seen a string of complaints about leading banks, including Santander, HSBC and Barclays, from customers who have been unable to get any money.

Ms Solanki has built a reputation providing cosmetic tattooing, for people whose appearance is affected by surgery or conditions such as alopecia.

But in March she had to shut her clinic in Finchley in North London, furloughing her four staff.

She used the government grant for 80% of their wages but topped them up to 100%, which has added to the cost of keeping the business alive. So she applied for the loan through Barclays.

“Barclays seem overloaded,” she says, “They have just not been able to deliver.”

Ms Solanki tried to have her overdraft expanded, but that failed. She tried to get a Coronavirus Business Interruption Loan from the bank, but that did not come through.

Now Bounce Back Loans – interest free for a year – seem to be out of her reach as well, even though they are fully backed by the government, so the bank cannot lose.

Barclays customers have told BBC News that they have had to wait hours on the phone to the bank trying to get applications started.

Some have been told, incorrectly, that their personal details were wrongly entered. Others that having two signatories on their business account is a problem.

Maria Ogden, who runs a vehicle hire company in Oswestry, in Shropshire, has also been waiting for one of the emergency loans, in her case from Santander.

“I’ve got vehicles on finance, insurance, rent – and people knocking on the door for payments,” she says, “but we can’t earn any money.”

Ms Ogden’s business is allowed to stay open during the pandemic but she has hardly any customers and has furloughed her staff.

She wants the maximum £50,000 Bounce Back Loan as well. But after she applied on 5th May, the day after the launch, she is still waiting to hear back.

“I’ve banked with them for years. What’s the delay?” she asks.

Like Ms Solanki, Ms Ogden says she tried to get the Coronavirus Business Interruption Loan, then switched to the Bounce Back option because it was supposed to be easier and quicker.

“All my time this last week has been spent on the phone, on emails, trying to find out about this loan, instead of spending it working out how to help the business,” Ms Ogden says. “Without it, I’m finished.”

Santander told BBC News, “While most applications have been processed quickly and smoothly, some are more complicated and we are working through these as quickly as we can.”

Many have been getting the loans, including Peter Amable who runs Storm Hair and Beauty in Shrewsbury.

“I’m elated. I can stop stressing about my rent,” he says.

But he has had an anxious wait. The £4,000 he wanted from Barclays has only just gone into his account. He applied 11 days ago and expected the money the next day from what was billed as fast-track lending.

“I think it has only come because I have been constantly at them, going on and on,” he says. “It shouldn’t be like that. It is shocking.”

Government figures earlier in the week showed the huge scale of the scheme.

Nearly 270,000 Bounce Back Loans had already been approved for more than £8bn. However, a significant minority of applicants are finding that the funds are hard to get hold of.

A Treasury spokesman said: “Millions has already landed in people’s accounts and lenders are working hard to process and approve all applications as quickly as possible.

“All lenders are welcome to apply to the scheme, and we are working closely with the banks to ensure firms get the finance they need.”

At Barclays, it is clear that there are some applications which simply cannot get through the bank’s online process, so a human has to step in to deal with discrepancies, or verify conflicting information.

A Barclays spokesperson said: “In the first week alone of this scheme being live, we approved almost 70,000 Bounce Back Loans worth more than £2.1bn, and 95% of customers who have applied since the launch of the BBLS have received their funds.

“Our colleagues are working extraordinarily hard to get these loans into the hands of customers as quickly as possible, with the number of loans approved in the first week of the scheme equivalent to the amount that we would normally approve over a three year period.”

Santander said it had approved more than 70,000 online applications and paid out almost £1.3bn to business customers.

“We’ve seen unprecedented demand for Bounce Back Loans and have been working hard to get these much-needed loans to our customers as quickly as possible and we apologise for any inconvenience,” HSBC said in a statement.