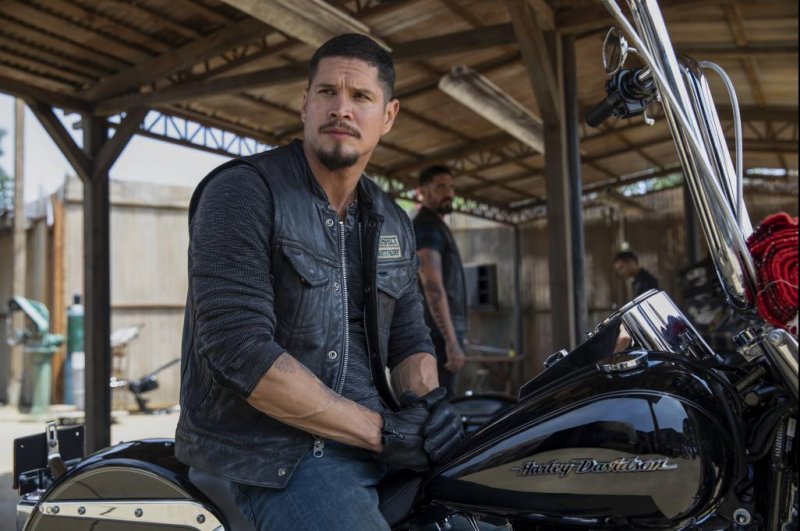 NEW YORK, March 16 (UPI) — The stars of Mayans M.C. say shared family trauma and EZ’s full membership in the titular outlaw motorcycle club will make the Reyes brothers closer than ever in Season 3, out Tuesday.

“It’s a lot of love and it’s a lot of pain. It’s family, and it is filled with a lot of history,” J.D. Pardo, who plays EZ Reyes, told UPI about the siblings’ relationship in a recent Zoom interview.

Felipe moved with his wife, Marisol, from Mexico to South California decades earlier in the hope of forging safer, more prosperous lives for them and their children.

But Season 2 ended with the revelation that Dita (Ada Maris), the matriarch of the Galindo drug cartel, had hired a hitman years ago to kill the Reyes parents, ending in the murder of Marisol.

Wracked with guilt and rejected by Felipe, with whom she had had an affair long ago, Dita pleaded with the three men to execute her.

Felipe is horrified when EZ honored her request.

Angel endured additional pain last season when he was forced to decide whether valuable information he and EZ obtained could be used to blackmail a ruthless lawman to either save his father from deportation or his lover Adelita (Carla Baratta) and their newborn son from captivity.

“In Season 1, you saw Angel not want his brother to get into this life and the evolution is that he knows his brother is not going anywhere,” Cardenas said.

“Angel’s looking out for EZ, putting him on the right path of least resistance,” he added. “They are trying to come to a resolution of who their mother’s killer was.

“So, again, that is another thing that ties them even closer together. And, also, just their relationship in the club. I think they are both trying to find a path to the top. They are on that journey together.”

Now that EZ no longer is a Mayans prospect, but a full-fledged member of the club with official patches on his leather vest, he must embrace all of the responsibilities and privileges that entails.

EZ gets the chance to prove himself when he comes up with an ingenious way to transport drugs and weapons after the authorities increase their presence at the U.S.-Mexico border.

“EZ is a patched member. He is in the club, and now a situation has presented itself with the other chapters of the Mayans, and the border is shut down, so they are forced to, as brothers, and as club members work together and solve the problem,” Pardo said.

In the upcoming episodes, EZ learns how to make suggestions to the other club members and stand up for himself more.

“Angel uses his voice. He says what he wants to say, and so EZ is trying to find his way into that,” Pardo said, acknowledging Angel won’t always be comfortable with EZ’s contributions.

“They’re brothers, so they are going to fight about everything,” Pardo said.

Cardenas said Angel doesn’t feel threatened now that he and EZ are on more equal footing with their fellow Mayans.

“Angel’s trying to look for a life outside the club,” Cardenas said. “Angel starts to see how his brother is finding his voice in the club, and I think he is a little surprised at times seeing how strong he is with his conviction about things. He has some really good ideas that could help this club evolve.”

The actors offered few details about how Season 2 hints that Filipe may have fathered Dita’s son, Miguel, might play out this season. Not only is Miguel now the head of the Galindo cartel, but he also is married to EZ’s ex-girlfriend, Emily (Sarah Bolger).

“I don’t know if we necessarily know anything about Miguel yet, this Miguel character you speak of,” Cardenas joked.

“I can only speak for Angel. At the end of Season 2, you literally see Angel choose his father over the love of his life and his baby.

“With that being said, I still think there is always going to be friction with Angel and his father. Even though he was the first born, Angel was always the lesser son.”

EZ knows that killing Dita has changed his relationship with the father who always loved and protected him.

“He’s missing his dad,” Pardo said of EZ. “Felipe is, obviously, affected by the death of Dita and the death of his wife and how his sons have gotten involved in this in such a way.”

Olmos told UPI in a separate Zoom chat that Felipe is in such an “ugly” place that he finds it difficult to even get out of bed at the opening of Season 3.

“It’s a very tragic thing that has happened to all of them — the whole family,” he explained. “The two boys don’t know the depth of what the relationship [with Dita] was, but they do know that this is the person who really had their mother killed, so it is very, very bad. … It’s the darkest season we’ve ever done and Mayans has never been an uplifting kind of a piece.”

Felipe is shocked to witness EZ so filled with rage and vengeance that he was capable of strangling a woman.

“He choked her to death. He stands there just choking her and that takes an awful lot. I don’t know where people go that can do that to another human being,” Olmos said about how EZ killed Dita.

“[Dita] was the love of my life, but it was wrong. Very, very wrong and it was only going to bring total destruction to her and I loved her and I said, ‘I’ve gotta get out of here.’ She wouldn’t let me go. And, of course, when I did leave, she found me years later.”

The actors said they are happy being part of a show that is action-packed and emotionally resonant, but also spotlights important contemporary issues like power, corruption, poverty, drugs, purpose, brotherhood, immigration and the American dream.

“I’m blown away by [James’] ability to see the world and tell the story in such an organic way,” Pardo said. “There’s a lot going on in Mayans. Any story, you have to believe a part of it, right? We bring in elements to the story that are real.”

Cardenas also praised the writers, noting they are never too “on the nose” with these issues.

“They give glances of it, so the audience is thinking about it,” he said.

Olmos pointed out that the location of the show provides rich opportunities for storytelling.

“You’re on the border. Everything happens there, and that is what is happening right now as we speak,” he said.

“All of our governments have had a problem with the border, and right now is no different. By us bringing to light the difficulties that are happening there, it really is timely. Power. Greed is really, really overwhelming, and it really shows itself in our stories.”