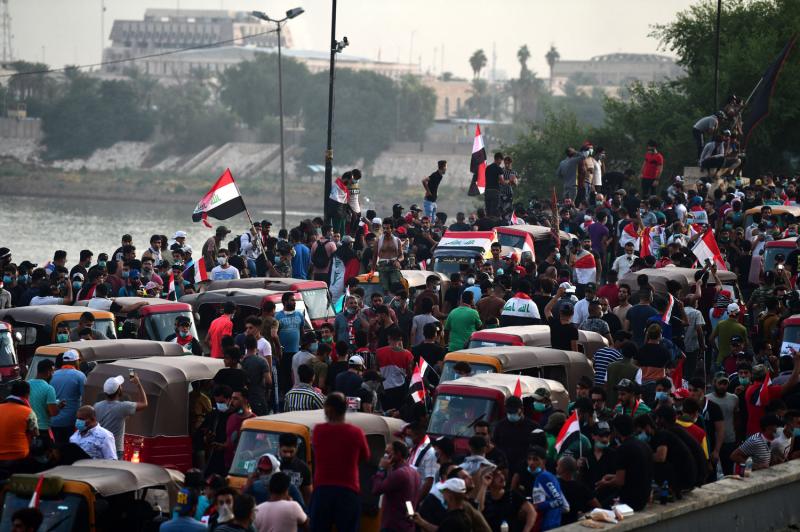 The forces said the move was meant to control violent protests centered in Baghdad and Nasiriya that began on Friday opposing corruption and calling for a reform of the country’s political system.

“Counter-Terrorism Service forces have been deployed in some areas of Baghdad to protect state buildings from undisciplined elements taking advantage of security forces being busy with protecting protests and protesters,” the forces said in a statement.

The U.N. Iraqi High Commission on Human Rights said 74 people were killed over the three-day period, most while attempting to enter political party headquarters. Most were shot to death by security guards at the party headquarters while a few people died of suffocation due to tear gas, the statement said.

The commission said it documented upwards of 3,654 people injured, including security force personnel, mostly due to tear gas deployed to disperse protesters at sit-ins, adding that the majority were released from the hospital after receiving treatment.

“The IHCHR calls on the Iraqi government to implement the legitimate demands of the demonstrators, which enhance and guarantee human rights situation,” the organization said in a statement.

Human Rights Watch condemned the government’s use of tear gas despite having previously given protesters assurances that they wouldn’t face a violent crackdown.

“It is unacceptable that Iraqi forces are firing tear gas canisters directly at crowds, instead of above them,” HRW’s Middle East Director Sarah Leah Whiton said in a statement. “No one should die from a tear gas canister.”

Some 90 government and private buildings were either torched or damaged by “individuals who wanted to divert the demonstrations from their peaceful path,” the U.N. Iraqi High Commission on Human Rights said, adding, security forces also arrested 158 people in the regions of Basra, Thi-Qar and Babil while attempting to disperse the sit-in protests.

Through his spokesman, Mahdi also said he would not bend to protesters’ demands and stepdown, warning doing so could submerge the country into a “dangerous situation.”

“The prime minister continues to respond to the legitimate demands of the demonstrators and will not lose control of the situation,” Spokesman Sa’ad Al-Hadaithi told local media.

The protests against the government began in early October but paused until Friday after security forces killed about 150 protesters throughout the country.

Protests have focused on political parties with ties to Iranian militias, which are now part of the Iraqi security forces.

Demonstrators have vandalized the offices of some of the political parties and militias, prompting the government to respond by restricting movements in those areas on Saturday.

United Nations Special Representative to Iraq Jeanine Hennis-Passchaert, condemned the political parties for failing to address the calls to control corruption and for their handling of the protests.

“Armed entities sabotaging the peaceful demonstrations, eroding the government’s credibility and ability to act, cannot be tolerated,” she said.