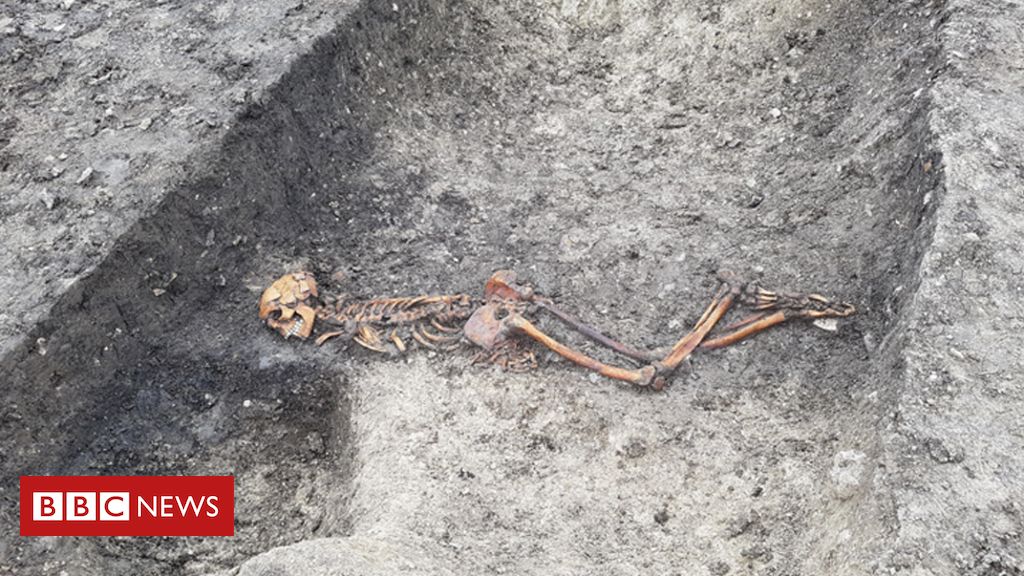 An Iron Age skeleton with his hands bound has been discovered by HS2 project archaeologists, who believe he may be a murder victim.

The remains of the 2,000-year-old adult male were found face down at Wellwick Farm near Wendover in Buckinghamshire.

Project archaeologist Dr Rachel Wood described the death as “a mystery” and hopes further analysis will shed light on the “potentially gruesome” find.

A Stonehenge-style wooden formation and Roman burial have also been discovered.

They are among a number of finds ranging from the Neolithic Age to the Medieval period unearthed ahead of construction work for the 225mph (362 km/h) rail line.

Dr Wood, who works for Fusion JV, said: “Discovering a site showing human activity spanning 4,000 years came as a bit of a surprise to us.”

A large Neolithic circular monument of wooden posts 65m (213 ft) in diameter and aligned with the winter solstice, “similar to Stonehenge”, was uncovered.

The site also has evidence of domestic occupation during the Bronze to Iron Ages (3000BC to AD43), including a roundhouse and animal pits.

During the Roman era it was used for burials and a “high status” skeleton buried in an “expensive” lead coffin was unearthed.

Dr Wood said the fascinating thing about the site was its “persistent use over centuries for the burial of specific, high status people”.

The only exception was the Iron Age skeleton.

Dr Wood said: “The death of the Wellwick Farm man remains a mystery to us, but there aren’t many ways you end up in a bottom of a ditch, face down, with your hands bound.

“We hope our osteologists will be able to shed more light on this potentially gruesome death.”

The HS2 high-speed rail link will connect London to Birmingham, Manchester and Leeds.

It is the biggest infrastructure project in Europe, but has been delayed and faced concerns over the exact route and spiralling costs.