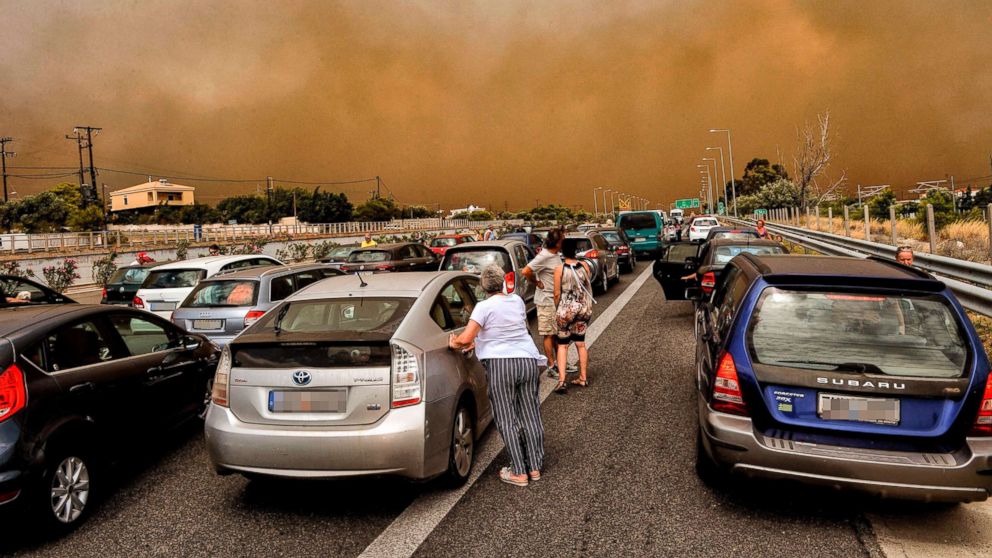 When fires erupted near his summer home in the coastal Greek town of Mati, Nikos Stavrinidis and his wife ran to the nearest beach, flames and smoke licking at their heels all the way.

But when they got to the water’s edge, Stavrinidis and his wife were forced to make a desperate choice: Either jump into the water and swim for their lives or risk being consumed by a monster inferno the likes of which the couple had never seen before.

They chose to swim, hoping someone would rescue them.

“It happened very fast,” Stavrinidis told the Associated Press of how the fire swept into his neighborhood. “The fire was in the distance, then sparks from the fire reached us. Then the fire was all around us.”

He said he and his wife had traveled to their summer home and were preparing for a visit from their daughter, a student, when at about 5 p.m. local time on Monday he saw the smoke billowing from a forest in the distance.

Fire officials said several fires seemed to erupt at once in the area outside the capital of Athens, where temperatures had been in the 90s for days.

The lack of rain in the area had dried out vegetation, turning the hillsides into a vulnerable tinder box.

The fire was quickly fueled by the parched landscape and winds that suddenly kicked up to 50 miles per hour.

“The wind was indescribable — it was incredible,” Stavrinidis told the AP. “I’ve never seen anything like this before in my life.”

He said the rapidly advancing fire terrified him. He and his wife grabbed what they could from their home and ran.

When they got to the water, the smoke was so thick they couldn’t see. They were faced with one choice: jump in or perish.

“We had to swim out because of the smoke, but we couldn’t see where anything was,” he said.

He said neighbors joined them and they all swam out together.

“We fell into the sea and tried to distance ourselves, to get away from the carbon dioxide,” Stavrinidis said.

But as they swam further out, they found themselves in even more peril.

“But as we went further, there was a lot of wind and a lot of currents and it started taking us away from the coast,” he said. “We were not able to see where we were.”

He said for two hours, he and his wife and other evacuees treaded water, praying rescuers would find them as darkness settled on the area.

Some people in the water with him, he said, didn’t survive.

“It was terrible to see the person next to you drowning and not be able to help him,” Stavrinidis said. “That will stay with me.”

Stavrinidis said he and his wife and two friends tried to stay together, all struggling to stay afloat. Just as their predicament seemed to be at its bleakest, a fishing boat with an Egyptian crew appeared out of the blue.

“They jumped into the sea with their clothes still on,” he said of the Good Samaritan fishing crew.

Exhausted from the harrowing ordeal, Stavrinidis said he and his wife were just thankful to be alive.

“They made us tea and kept us warm,” he said of the rescuers, who took them to shore. “They were great.”