April 6 (UPI) — Japanese Prime Minister Shinzo Abe is planning to declare a state of emergency due to the coronavirus pandemic for Tokyo and six other prefectures starting as early as Tuesday, official media reported.

The declaration will cover Tokyo, Kanagawa, Saitama, Chiba, Osaka, Hyogo and Fukuoka prefectures and is expected to be in place for about a month.

Abe had previously resisted calling for a lockdown even as Japan’s coronavirus toll increased, instead urging voluntary cooperation in enforcing social distancing measures. More than 3,600 people have tested positive for the coronavirus disease and 85 have died, according to Johns Hopkins University.

The prime minister was expected to make the announcement Monday.

In Britain, officials said Monday Prime Minister Boris Johnson was moved to an intensive-care unit as his coronavirus symptoms worsened. He announced a week ago that he’d tested positive for the coronavirus disease.

In India, the number of cases surged on Monday as health officials reported an increase of nearly 700 new infections, hiking the national total to more than 4,000.

They said nearly 1,500 cases are related to the Muslim Tablighi Jamaat movement and its annual conference, which was held a month ago in New Delhi.

In China, the former epicenter of the pandemic, the National Health Commission reported 39 new COVID-19 cases. All except one was imported, it said. The new domestic case was reported in Guangdong Province.

More than 100 patients were discharged from Chinese hospitals on Sunday, bringing the recovery total to more than 77,000.

Chinese officials also noted a rise in asymptomatic COVID-19 cases, as dozens were confirmed Sunday. More than 1,000 asymptomatic cases are under medical observation, the commission said.

Scenes from a pandemic: World copes with COVID-19 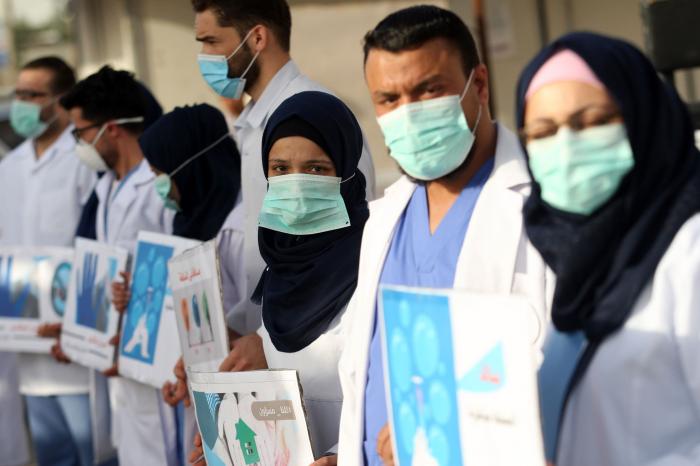 Medical personnel stand outside the Muscat Medical Center as people leave quarantine, arriving through a border crossing into the Gaza strip on April 6. Photo by Ismael Mohamad/UPI | License Photo