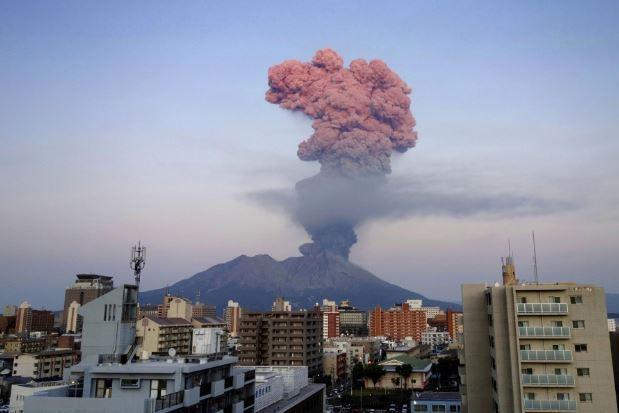 The eruption ejected smoke and debris more than 3 miles into the air, the Japan Meteorological Agency said.

The explosions in the mountain’s Minamidake crater, at 3,412 feet in elevation, darkened skies over Kyushu island in southwest Japan and formed the largest ash cloud since 2016.

Kagoshima Prefecture officials said there were no immediate reports of damage or injuries.

Pulverized rock in volcanic ash can get stuck inside jet engines and stall airliners in flight. A British Airways Boeing 747 lost all four engines after flying through an ash cloud over waters off Indonesia in 1982. The crew managed to restart the engines on both occasions and landed safely.

The Japanese agency said volcanic activity is expected to continue, although debris flows of lava are expected only around a small radius surrounding the crater.

The Kagoshima branch of the weather agency rated the volcano as Level 2 Friday, indicating “Do not approach the crater.”

Japan’s most active volcano, Mount Sakurajima sits on a peninsula that was formerly an island. Lava from a 1914 eruption connected it with the Osumi Peninsula on Kyushu island.