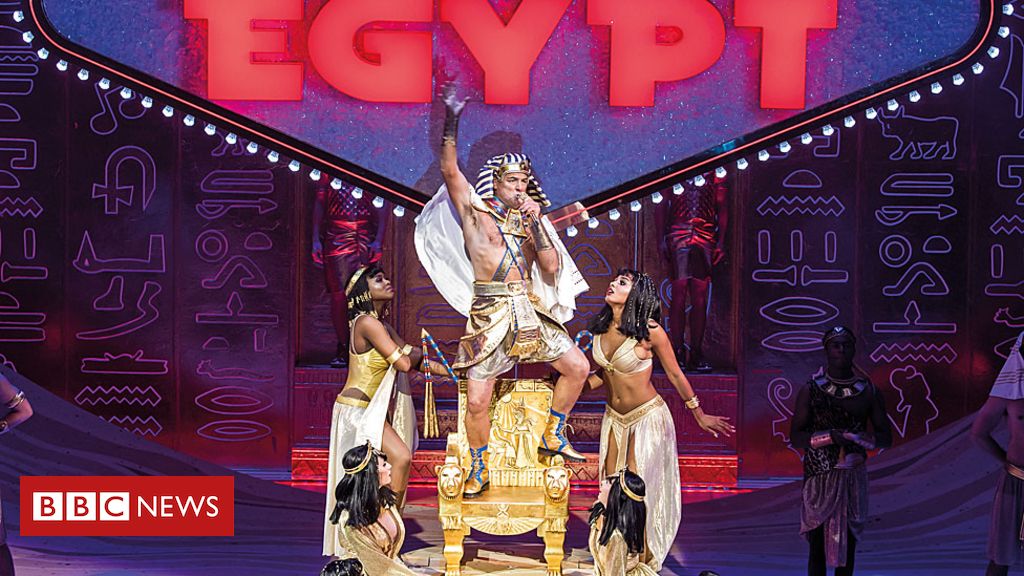 Jason Donovan has said he “didn’t have to think twice” about taking a role in a new production of Joseph and The Amazing Technicolor Dreamcoat.

“Why wouldn’t you complete that circle?,” said the ex-Neighbours star, who famously played Joseph at the London Palladium in the 1990s.

Joseph is now back at the Palladium, with newcomer Jac Yarrow in the title role and Donovan playing the Pharoah.

“It’s a phenomenon,” said Donovan of the musical first performed in 1968.

“Joseph is a timeless piece with a universal appeal that the audience has an incredible emotional connection to,” he added.

The 51-year-old said he had no reservations about playing a supporting role in a show he previously starred in.

“I’ve been there and done that,” he told the BBC, calling the current production “a bit more modern and punchy” than the one he had success in.

The show was first presented by Andrew Lloyd Webber and Tim Rice as a 15 minute performance at a school and was first performed in the West End in 1973.

“Having Jason here has been a dream,” said 21-year-old Yarrow, the current wearer of Joseph’s “coat of many colours”.

“I felt intimidated by the role but never by him. He’s boosted my confidence so much and has been so supportive and brilliant.”

The new staging puts more focus than is usual on the Narrator who recounts Joseph’s rise from poor shepherd to the Pharoah’s soothsayer.

This character is played by Sheridan Smith, who has her own personal connection to the material.

“The first theatre show I ever saw was Joseph on a school trip,” said the actress, who saw the musical when Phillip Schofield played the lead.

“So when they came to me with this I was like, ‘Oh my God’. The nostalgia of that – to actually be in it when it was the first thing I saw.”

Bafta winner Smith said she had not initially realised her role would be so integral to the production.

“I thought this would be lovely and easy,” she admitted. “I thought I’d just pop in and pop out, but now I never leave the stage.

“But I love it,” she went on. “It’s two hours of complete and utter joy, and just what I needed right now.”

Her appearance follows what one newspaper called “four years of hell” during which Smith faced personal losses and mental health issues.

Thursday’s opening night saw the musical’s co-creators take to the stage at what Lord Lloyd-Webber dubbed “the home of Joseph”.

“It seems to have a little promise to it, don’t you think?” said the composer, who went on to hint the show might return in 2020.

Joseph is one of a number of early Lloyd Webber-Rice musicals that are being staged in London this summer.

Jesus Christ Superstar is currently running at the Barbican, while a new production of Evita, the duo’s musical biography of Argentine political icon Eva Peron, opens at the Open Air Theatre in Regent’s Park next month.

“It’s just a coincidence all these things have come up at once,” he went on. “It’s quite tiring actually.”

Matt Cardle, who appears as Pilate in the rock-based retelling of Christ’s crucifixion, said it was “very humbling” to be part of the musical’s 50-year legacy.

“It’s such an honour to be part of something that those two have created,” the former X Factor winner told the BBC.

According to Joseph director Laurence Connor, Lloyd Webber and Rice’s early hits are “very much part of the British musical theatre DNA”.

“All three are brilliant musical pieces,” agreed Superstar director Timothy Sheader. “They’re part of our vernacular and our culture, much like Shakespeare.”

Joseph and His Amazing Technicolor Dreamcoat runs at the London Palladium until 8 September. Jesus Christ Superstar is at the Barbican Theatre until 24 August while Evita runs at the Open Air Theatre in Regent’s Park from 2 August to 21 September.