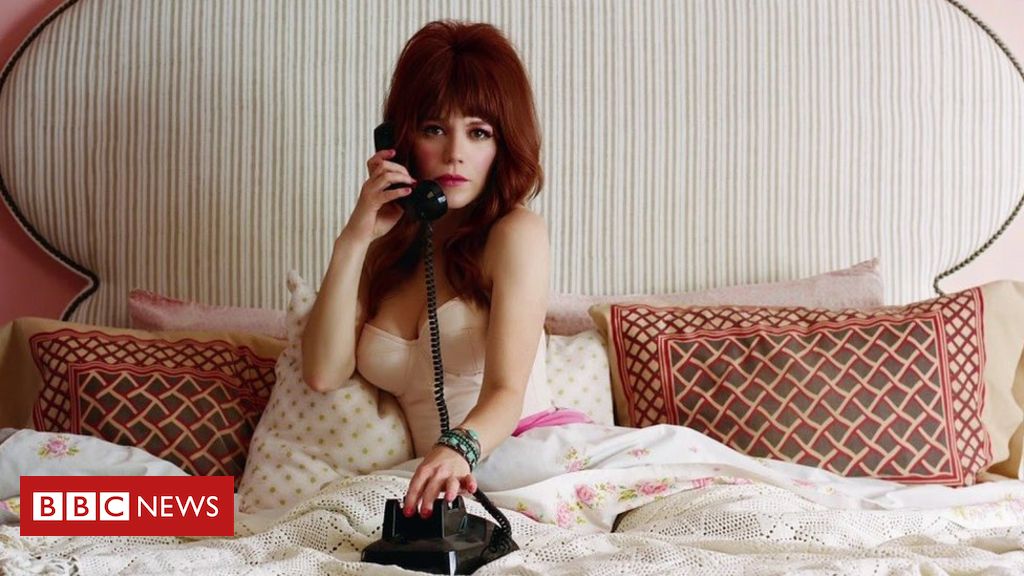 Five years on from her last solo record, US singer-songwriter Jenny Lewis, formerly of Rilo Kiley, is back with a new album. Our man caught up with her.

Narcolepsy, peanut allergies, soggy Weetabix and the actor Jeff Goldblum are just a few of the things Jenny Lewis talks about during her interview with BBC News.

Other topics include party clowns, rotary phones (she collects them), institutional sexism and drinking PG Tips tea to lubricate her vocal cords (“it’s my studio secret”).

Clearly the singer is witty and engaging and curious – about the world, about relationships and how phones affect us all.

“Looking at a phone is like reading someone’s mind,” she says. “So their mind is just sitting out on the table when they’re not in the room… So tempting.”

Has she ever succumbed to that temptation? “Oh yes,” she says. “It’s such an invasion of privacy, but also, sometimes, a necessity.”

It doesn’t always end well, though, as Lewis admits in Taffy, a tremulous ballad from her latest album, On the Line.

“My dress was see-through/As I looked through your phone,” she sings. “I am such a coward/How could you send her flowers?“

Seeing her partner’s infidelity spelled out in black and white was “very painful,” she says – “but how interesting that information was out there.

“I didn’t look [at his phone] because there was nothing in there. I knew something was in there and I found it.

“I’m not proud of that, and I hope I have never do that again. But I don’t regret doing it.”

The end of Lewis’s 12-year relationship with musician Jonathan Rice casts a shadow over On the Line. But she balances the bourbon-soaked sadness with swaggering tales of hedonism and self-discovery.

“The record started out as a break-up record, but it’s really a rebound record,” she says.

The songs were written over five years as Lewis criss-crossed the USA trying to avoid the home she and Rice shared.

She stayed with fellow musician St Vincent in New York and spent time in Nashville, Minnesota and Manhattan.

There she started an all-female side project in an abandoned shop which passers-by mistook for an art installation.

All the while, she was percolating ideas for her album. “I am a words guy, so I need to really take the time on the storytelling,” she says.

Unlike most modern artists, Jenny does not stockpile melodies in voice notes or keep a vast document of lyrical fragments.

“I’m a scrap of paper person,” she explains. “I’ll tear off the corner of a boarding pass, or write on a barf bag.

The process sounds wilfully disorganised. (Lewis says she has “shoeboxes full of scraps dating back 20 years”.) But her lyrics are anything but haphazard.

On the Line is full of imagery and detail, from the “narcoleptic poet” she kisses in a graveyard on Heads Gonna Roll to the moment she “cries like Meryl Streep” on Dogwood.

Not every song is autobiographical, and Lewis wants the listener’s imagination to play an equal role in the storytelling.

Indeed, she finds people’s obsession with the “facts” behind her lyrics unhelpful.

“I feel like with female singer-songwriters in particular, people are like ‘Is this true? Is it about you? Is it about him?’

“Do you really want to know? Is that going to help you enjoy the song more?”

Lewis says her songs are “serious stuff”. And it doesn’t get any more serious than Little White Dove, a song about visiting her dying mother in hospital.

They’d often had a difficult relationship. When Lewis was a child actor on shows like Growing Pains, her mum was siphoning off her salary to fund what the star now suspects was a small-time career as a drug dealer.

By 2006 they’d been estranged for almost a decade. But the singer believes her mother clung onto life to facilitate a reconciliation.

They finally found forgiveness, she sings, “behind a yellow curtain on the second floor.”

“It helped me. Every day it just helped, you know, to get out of the car and walk through the parking lot and sign in at the desk.

“I’d have a little bassline in my head as I made my way to the elevator. It really carried me through.”

Lewis first entered music with the stripped-back rock of Rilo Kiley. But her solo material has tended towards Americana, and On the Line is her lushest, most melodic record to date.

They recorded as a band, with Lewis sitting behind the piano Carole King used on Tapestry and singing live surrounded by her idols.

“It’s important to bridge the gap between the generations,” she says. “I just want to learn from these guys, because you can’t teach feel, you just feel feel.

“So to play with [drummer] Jim Keltner, who played on John Lennon’s Imagine… Wow. I couldn’t look at him!

“Having started making music at home on a little tape player, it felt like the culmination of 20 years of work.”

Production was handled by Beck and Ryan Adams, who was subsequently accused of sexual and psychological abuse towards women.

Following the allegations, Lewis issued a statement saying she “stands in solidarity with the women who have come forward”.

She later launched her album with a fundraiser for the Los Angeles Women’s Center.

She doesn’t want to discuss the allegations any further – and it seems Adams’ input was minimal at best.

“We were in the studio for five days, then he pretty much bounced and I had to finish the album by myself,” Lewis told Pitchfork.

Beck was a more crucial collaborator, recording the songs on analogue tape to capture the warmth of her seasoned session players.

“In a digital form we tend to over-fix stuff – even when we’re typing,” she reckons.

“You know when you’re handwriting a letter? You can’t put white-out on everything, so you have to accept some mistakes.

In fact, there is only one moment of digital manipulation on the record: a brief chirrup of auto-tune in the middle of Little White Dove.

“That came about because Beck was altering my demo vocal, to show me how he wanted me to sing the song,” she says.

“But when I heard it I said, ‘That’s got to stay! That’s the coolest thing in the whole song.’

“We had like a long talk about it – that people would think it was a mistake. But this is the stuff that excites me about record making: little happy accidents.

“You can’t come up with that stuff, it just happens. But the mistakes are what makes the music human, because we’re all flawed.”

On the Line is out now on Warner Bros Records.