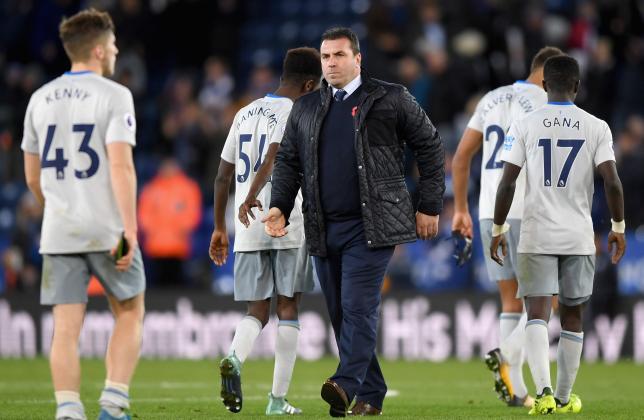 Joey Barton has launched an amazing attack on David Unsworth on talkSPORT.

In the wake of Everton’s 2-0 defeat at Leicester, Barton slammed the Toffees’ caretaker boss as a “glorified PE teacher” and claimed the club will be relegated if he remains in charge.

Despite losing successive games since taking the reins, Unsworth is a leading contender to succeed Ronald Koeman on a permanent basis having impressed with his work in charge of the Under-23s side.

“I watched him waddling on to the coach. How can you get players to exert themselves physically when you’re out of shape?

“I used to watch him as an Evertonian and he was the most immobile left-back I’ve ever seen. He’s not a manager and doesn’t look like one.

“Unsworth makes Alan Brazil look like an athlete. I used to call him Chipper Unsworth because he used to chip it and lose it every time.

“I’m a firm believer that teams reflect their manager and Everton did today. They were sloppy.

“Everton need to sort their managerial situation out because it can’t be Unsworth.”

Barton’s controversial comments came in the immediate aftermath of Everton’s defeat on Sunday, and he went on repeat his criticisms of Unsworth when he co-hosted Monday’s Sports Breakfast.

He told Alan Brazil: “He’s talking a big game in the papers saying he wants the job and thinks he can handle the job full-time.

“He is saying this on the back of having never managed a senior side, not really done an apprenticeship and gone down the leagues to ply his trade and work his way back up into a position to manage a Premier League club.

“In my opinion, he has cosied up to Bill Kenwright, who he knows is a romantic, who he knows likes former players to be involved in the football club, and is attempting to take a shortcut.

“He doesn’t look right to me. He is not the right man for the Everton job.

“If he takes the Everton job, Everton will get relegated.”