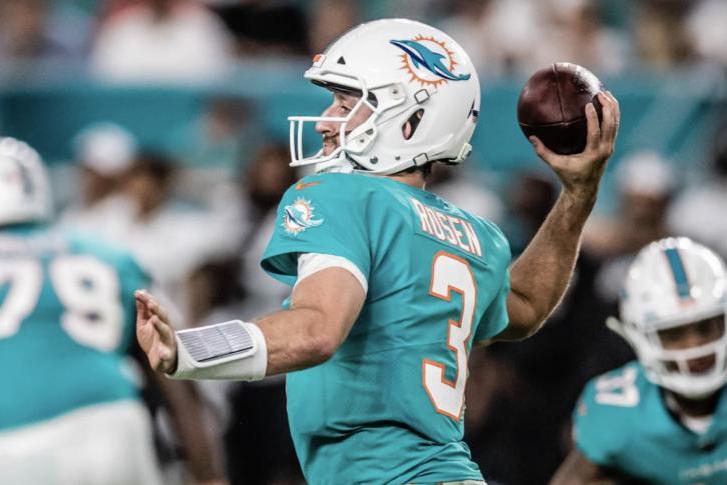 Rosen hurdled over the pressure and continued to buy time, before firing a precise 39-yard pass downfield for a first down. That was just one of the spectacular sequences showcasing Rosen’s talent during the Dolphins’ 22-7 win against the Jaguars Thursday at Hard Rock Stadium in Miami Gardens.

The Dolphins started Ryan Fitzpatrick and kept him in the game until bringing in Rosen in the third quarter. Rosen — who is competing with Fitzpatrick for the starting job — had the field goal at his back as he took over on the Dolphins’ 1-yard-line.

He was able to use his pocket presence and agility to escape pressure and led the Dolphins on a 99-yard, 13-play scoring drive. Rosen completed 5-of-7 passes for 59 yards in the win. He also ran for 23 yards.

“He played well and that’s makes the decision harder,” Dolphins coach Brian Flores said. “But there are other things at play here. Fitz played well I thought.”

Fitzpatrick completed 12-of-18 passes for 126 yards and a score for the Dolphins. Jaguars starter Nick Foles saw limited action, completing 6-of-10 passes for 48 yards, a touchdown and an interception. Leonard Fournette ran for 27 yards on seven carries for Jacksonville.

Jaguars first-round 2019 NFL Draft pick Josh Allen was a monster in the first half. The Kentucky product was in the backfield frequently, making three tackles, including one tackle for a loss.

The Dolphins and Jaguars alternated punts early on before the Jaguars got on the scoreboard first. Foles completed a 10-yard touchdown pass to Dede Westbrook to cap off an 8-play, 47-yard drive.

Miami punted on the following possession before intercepting Foles. The Dolphins turned that possession into a 40-yard field goal from Jason Sanders. The Jaguars missed a field goal on their next possession, allowing the Dolphins to take over near midfield.

Sanders converted on a 46-yard field goal to cut the Jaguars’ lead to one point.

The Dolphins marched down the field with an 11-play, 91-yard drive on their first possession of the second half. Fitzpatrick completed a nine-yard touchdown pass to Mark Walton to cap off the scoring drive.

The Dolphins then brought out Rosen to replace Fitzpatrick. Rosen took the ball from the 1-yard-line and marched downfield with a 13-play drive. Dolphins running back Patrick Laird finished the drive with a five-yard rushing score, giving Miami a 19-7 advantage.

Rosen led the Dolphins on a 9-play, 27-yard drive in the fourth quarter, resulting in another field goal.

The Dolphins battle the New Orleans Saints in another preseason game at 8 p.m. EDT Thursday, Aug. 29 at the Mercedes-Benz Superdome in New Orleans.