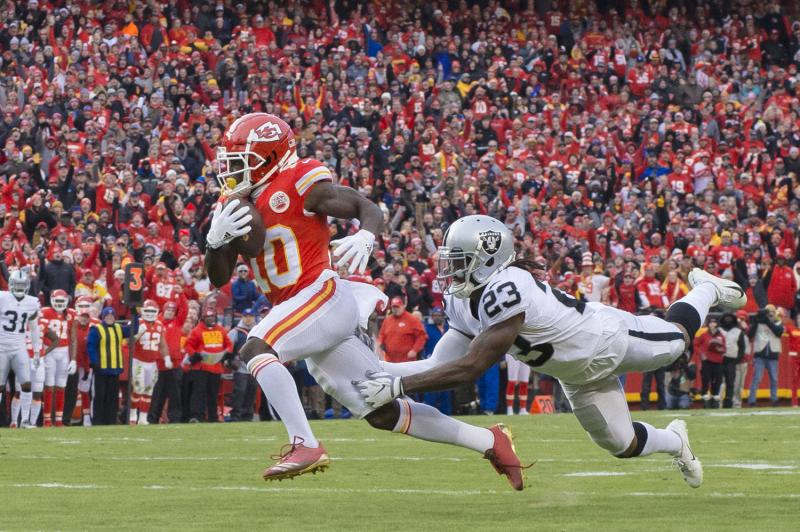 March 15 (UPI) — Kansas City Chiefs star wide receiver Tyreek Hill is linked to an investigation of an alleged incident that involves his son.

The Chiefs acknowledged to the Kansas City Star that an investigation involving Hill is underway.

“The club is aware of the investigation involving Tyreek Hill,” the Chiefs said in a statement. “We’re in the process of gathering information and have been in contact with the league and local authorities. We’ll have no further comment at this time.”

The 25-year-old Hill hasn’t been charged, according to the Star.

Police in Overland Park, Kan., were called to Hill’s home to investigate an alleged battery in which a juvenile is listed as a victim, according to a police report obtained by KCTV-5. Hill’s name isn’t listed on the report, but his address is the listed location. Hill’s fiancée, Crystal Espinal, was listed as “others involved.”

The report is dated Thursday but it’s unclear when the alleged incident happened. Espinal has been in communication with Overland Park police. The incident was against the couple’s three-year-old son, resulting in a broken arm, according to the Star.

According to KCTV-5, Overland Park police were previously called to Hill’s residence March 5 to investigate a report of child abuse or neglect. Hill’s name was directly listed on that report. The case was closed after three days when prosecution was declined.

Hill pleaded guilty to domestic assault and battery in 2015 after his then-pregnant girlfriend, Espinal, said he choked and punched her in 2014 while he attended Oklahoma State University. He was given three years of probation and ordered to attend anger management classes.

Hill completed his probation in 2018 and the conviction was dismissed.

The Chiefs selected Hill in the fifth round of the 2016 NFL Draft. He is a three-time Pro Bowl selection and two-time All-Pro choice.