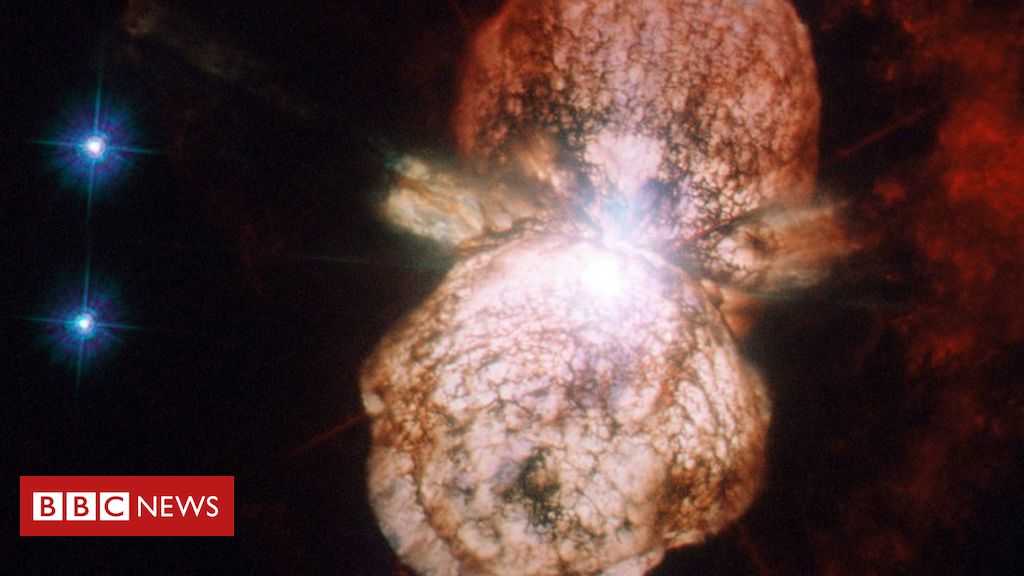 Terms like “heat death”, “big rip” and “vacuum decay” don’t sound all that inviting. And they aren’t.

They describe a few of the theories scientists have about how our universe will one day die.

But when cosmologist Katie Mack thinks about the end of everything, it gives her peace.

“There’s something about acknowledging the impermanence of existence that is just a little bit freeing,” she tells Radio 1 Newsbeat.

I’d be willing to bet there aren’t many people who feel that way – but even for Katie, it’s not quite as simple as it sounds.

Katie can still remember vividly when she first realised the universe could end at any moment – she was with her classmates and university professor.

“I was sitting on Professor Phinney’s living room floor with the rest of my undergraduate astronomy class for our weekly dessert night, while the professor sat with his three-year-old daughter on his lap,” she writes in her new book, The End of Everything.

She learned that scientists have no idea why the early universe expanded in the way it did – what’s called cosmic inflation – and that means they also have no way of saying space won’t start violently, rapidly ripping apart again at any moment.

“It kind-of made it personal, this idea that the whole universe has these processes going on all the time, but in principle they could happen to me: I’m in the universe, and I don’t have any protection from this stuff.

“One of the things I’m trying to do in the book is share that terror a little bit, which seems mean, but to help people have that more personal connection with what’s going on in the universe.”

What’s going on out there in space, beyond our planet, has fascinated Katie from a young age. But growing up in LA meant she didn’t have access to what most astronomers might say inspired their career choice.

Instead it was “all the weird stuff” that drew her in.

“All these mind-bending things like black holes and space time.”

When she learned that Stephen Hawking called himself a cosmologist, Katie “knew that was what I wanted to be”.

I’ll be honest here, I didn’t pass any of my sciences GCSEs, so there may have been better candidates available to interview a theoretical astrophysicist.

But after amassing 350,000 followers on Twitter, Katie has honed her skills at talking to plebs like me – and non-scientists are who her book is aimed at.

I’m not going to say I understood every concept in the book, but Katie admits that “you don’t just flip through it and absorb it all immediately”.

‘Good to take a moment’

“I know that a lot of science writers try to avoid that completely and walk you through every single thing, but I think sometimes it’s good to take a moment.”

Simple words like “heat death” are easy to understand – and that’s good, because it’s the most likely way our universe will come to an end.

“It’s where the universe just expands and expands and cools, and everything kind of decays and fades away,” Katie says, admitting that it’s not the “most exciting possibility”.

“The one that I find most fun is vacuum decay. And fun is probably not a word I should use about the destruction of the universe but it’s a fun idea.

“You tweak something in the equations and then you find out that it’s possible for a sort of bubble of death to materialise somewhere in the universe and just expand out at the speed of light and destroy everything.”

Science can say nothing to rule out the possibility.

“The only thing that makes people doubt that it could happen is that it’s in that realm where we can’t test any of the theory, so we don’t know if something changes about the theory in this higher energy situation,” Katie says.

It’s big thoughts like these that Katie thinks can offer us a “sense of perspective”.

“A lot of aspects of modern life are designed around trying to convince us that we are totally safe, protected, and in control of everything around us. And that’s just not true. Obviously there’s a whole situation in the world right now driving that home.

“But cosmically speaking as well we’re just kind of out there in this universe and we have to accept what it gives us.”