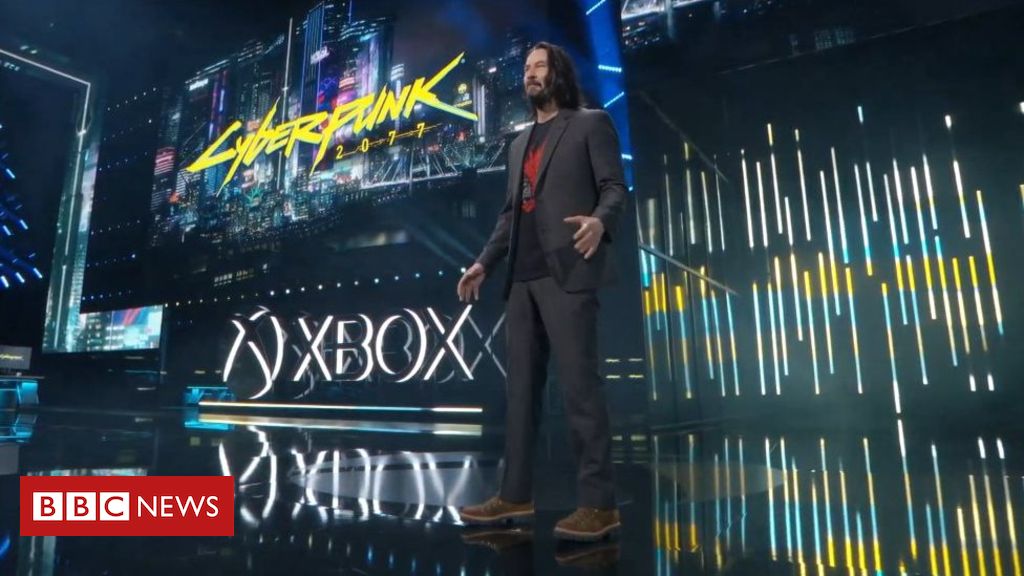 Keanu Reeves made a surprise appearance at Microsoft’s E3 Xbox press conference to reveal the launch date of one of the most anticipated video games.

The future-set role-playing game is being developed by CD Projekt Red, the studio behind the Witcher series.

Reeves – who has starred in the Matrix trilogy amongst other sci-fi movies – will appear in the title.

His brief appearance at the Xbox event drew huge applause with one attendee shouting: “You’re breathtaking.”

“No, you’re breathtaking,” the actor ad-libbed in reply.

Reeves’ involvement guarantees positive publicity for Poland’s CD Projekt, which had faced criticism for reportedly putting its team under pressure to do “extensive overtime” to have Cyberpunk 2077 ready to demo at E3.

Idiots who claimed the press conference format was dead needed to feel the force of some LIVE REEVES. The crowd was bubbling.

Like, I’m so torn. Keanu Reeves is a great person (seemingly) but we know that CD Projekt Red has been crunching employees. Like, this is bittersweet for me.

Microsoft is promising to show off a total of 60 titles at the show.

Other games teased so far include:

Microsoft also announced that it has launched Xbox Game Pass PC – a subscription service that will allow console titles to be download and played on Windows 10 computers.

It said 100 games will be included, including Forza Horizon 4, Metro Exodus and the Halo Master Chief Collection. It will charge $ 9.99 (£7.85) a month to be a member, and users can combine it with an Xbox Live Gold pass – which lets games be played on the console – for $ 14.99.

The firm is also planning to launch a separate service – xCloud – which will stream Xbox One games from either the firm’s data centres or users’ own consoles – in October.

Microsoft’s move comes ahead of the launch of a rival games-streaming service from Google called Stadia. The search giant plans to begin streaming titles in ultra-high definition 4K from November.

Amazon is also rumoured to be working on a cloud-based platform of its own.

“The benefit for Microsoft is a subscription model. You can pay [a monthly fee] and then you can stream it to a [low-spec] laptop.”

Microsoft is the only one of the big three console-makers holding a press conference at the Los Angeles expo this year.

Sony has opted to skip the event outright.

Nintendo will rely on a pre-recorded video presentation – as it has done since 2013 – but will host a showroom booth where it will demo new games.