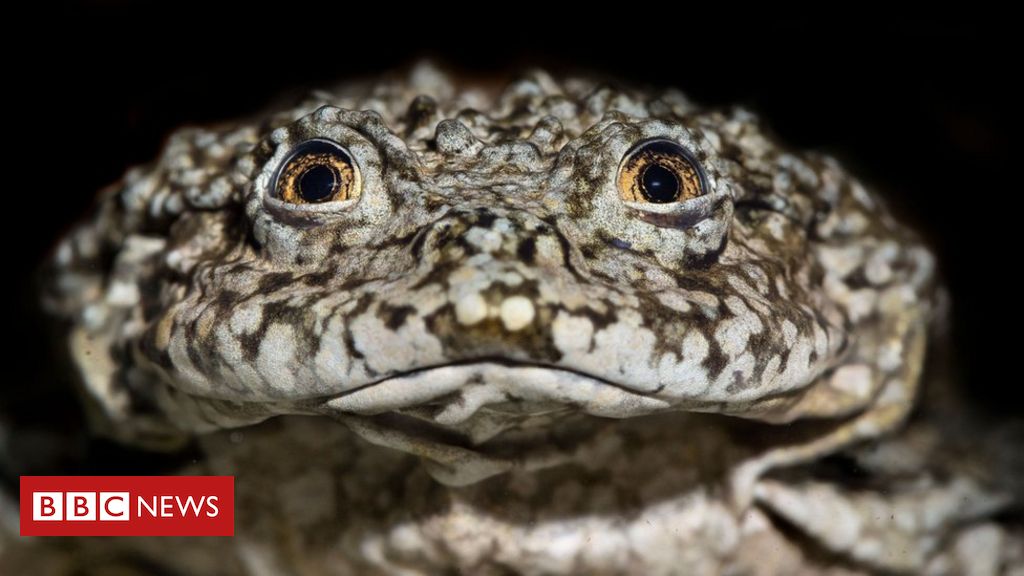 The frog is one of the world’s largest exclusively aquatic frogs and lives in the waters of Lake Titicaca, which straddles the border between Peru and Bolivia.

The aim of the project is to ensure the future of the endangered frog.

The amphibian is threatened by pollution from mining and also by its use in traditional medicine.

The scientists will study the habitat of the Lake Titicaca giant frog and also carry out genetic analyses to find out how to best protect the species.

The frog lives its entire life in the waters of Lake Titicaca and nearby lagoons. It has loose, baggy skin which ripples around its body in folds, which earned it the nickname “scrotum frog”.

Scientists think the skin flaps help the frogs absorb more oxygen in the lake’s water, which is located at a height of 3,800m (12,500ft) above sea level.

Telmatobius culeus are large – their bodies alone can measure up to 14.5cm (5.7in). However, French explorer Jacques Cousteau described coming across a specimen measuring 50cm in total length in the 1970s.

In 2016, thousands of the frogs were found dead on the shores of a tributary to Lake Titicaca. Pollution from agriculture and plastics were thought to have caused the mass dying.

But the frogs are also caught as they are mistakenly thought to be an aphrodisiac. They are mixed into a drink called “frog juice” sold at some local markets and their bodies are also used as amulets.

Their unusual skin is sometimes turned into small artisanal bags and their legs are eaten roasted or grilled.

The team will be made up by experts from Bolivia’s Science Museum and the country’s Natural History Museum, Peru’s Cayetano Heredia University, Ecuador’s Pontifical Catholic University, Denver Zoo in the US and the NGO NaturalWay.

It has the backing of the Peruvian and Bolivian governments as well as of the United Nations Development Programme.

All photos subject to copyright and courtesy of Bolivia’s Museum of Natural History “Alcide d’Orbigny”.